“Funny, at a moment like this he would have preferred to hear his father’s voice creeping into his head. Judgmental, clipped, but somehow easier to take than his mother’s voice, which was larded with guilt and sadness.” ~from Marthe by Elizabeth Figuls 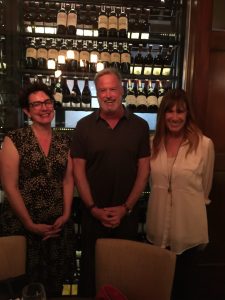 It was passages like this one that clinched the win for Elizabeth Figuls, one of three finalists in this year’s Allegra Johnson Prize in Novel Writing. Figuls was honored recently at a luncheon hosted by the Prize’s benefactors, Roberta J.M. Olson and Alexander B.V. Johnson. Also in attendance were finalists Blair Jockers and Sheri Polisini, Writers’ Program Director Linda Venis, Writers’ Program Manager Cindy Lieberman, Program Representative Katy Flaherty, and special guest Henriette Ivanans, winner of the inaugural Allegra Johnson competition in 2015 for her memoir-in-progress, Every Pill Has a Story.

The Allegra Johnson Prize in Memoir and Novel Writing was created in 2014 by Ms. Olson and Mr. Johnson to honor their daughter, a prolific and talented young writer who was working on a memoir and a novel through the UCLA Extension Writers’ Program when her life was tragically cut short. This merit-based and instructor-nominated award was created by her parents in the spirit of making a difference in the lives of promising Writers’ Program students. The Prize alternates each year between aspiring novelists and memoirists.

At the spirited luncheon, finalists discussed their work and talked about how their Writers’ Program courses helped shape their writing. Ms. Olson gave an impassioned talk about how meaningful it is to her and to Mr. Johnson to be able to honor their daughter’s memory by acknowledging and supporting other talented writers. Ms. Olson also expressed her deep gratitude to Director Linda Venis for establishing the Prize and she thanked the Writers’ Program staff members for their role in administering it. In an especially poignant moment, Olson and Johnson distributed copies of their daughter’s posthumously published book of poetry entitled Scent on the Wind.

Ms. Olson cited the strength of this year’s top manuscripts, selected from a total of 49 submissions and winnowed down to just three by judges Paul Mandelbaum and Melanie Thorne. Figuls’ manuscript, Marthe, rose to the top of the stack. Set in the 1950’s, Marthe is the story of a seamstress in Paris who fights to correct the lies of her past. The work-in-progress deals with the themes of identity, memory, and what it means to be an artist. It was selected by Ms. Olson and Mr. Johnson as this year’s winner for its “unbelievably moving passages suggesting a writer with the promise of profundity.”

The manuscripts of the two finalists showed much promise as well. Blair Jockers’ work-in-progress, tentatively entitled Permanence, is about an affluent Westside couple whose outlook on life changes once they lose their fortune and are forced to move into their slum tenement in LA’s Koreatown. Olson and Johnson cited the “fluid exchanges between characters” as one of the manuscript’s strongest points, and said they could feel the “author’s passion for writing.”

In Miss Lotto by finalist Sheri Polisini, winning the lottery is a dream come true for Dede, the single mother of a 14-year-old son with Asperger’s Syndrome. In her transition from rags to riches Dede makes some very poor choices, and when her reckless behavior catches up with her, she faces the real possibility of losing the things in life that matter most. Olson and Johnson said the story “drew us in and held both of us as we rooted for the protagonist.” They thought the “author’s voice was strong” and “the theme was excellent.”

In addition to being recognized at the luncheon for their work, finalists Jockers and Polisini each receive a complimentary full-length Writers’ Program course. Winner Elizabeth Figuls receives a $5,000 prize on behalf of the benefactors.