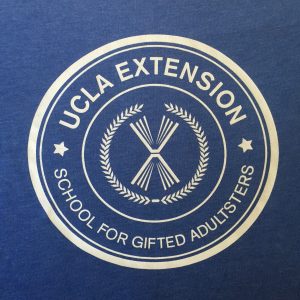 In 2014, the Writers’ Program received what any great hero receives at the start of a great story: a call to adventure. As fate would have it, the powers-that-be bestowed upon us the chance to exhibit at the largest convention in the world for all things fantasy and fiction-related: SAN DIEGO COMIC-CON! In case you missed the recap, you can find it online here.

Then, in 2015 (like any superhero franchise) we were given a chance to make a sequel! Naturally, we returned with a new cast of characters, representing UCLA Extension Visual Arts in addition to the Writers’ Program. As a result, box office earnings doubled, and the studio green lit a third installment. So this year, we’re making it a trilogy! *Cue theme music.*

Even more heroes are suiting up to join the fray in order to help protect and promote higher education in the Arts to all citizens. Returning to the force will be the dynamic duo of the Writers’ Program (myself and Chae Ko) and Visual Arts femme fatale Lexi Ibrahim. Newcomers include Visual Arts vigilante Nathan Vuong and Entertainment Studies freedom-fighters Kevin De Leon and Lian Partridge.

We’ll post a video online in August for the fans at home, but be sure to visit the panel for free swag if you attend the event! We’ll also have our booth exhibit open, starting “Preview Night” 6pm, Wednesday, July 20th until the closing bell rings at 5pm, Sunday, July 24th. We’ll be located at the ground level, toward the back of Hall A, aisle 600. We hope you’ll stop by to learn about our program and win free prizes like T-shirts, bags, and, if this year is anything like last year, much-needed fans, to name a few.

As for the rest of our team, here’s what we’ll be looking forward to:

Lexi Ibrahim: I am looking forward to the panel that we are doing this year! I think this will be a great opportunity for us to attract new students and deliver information on the types of classes we provide at UCLA Extension.

Nathan Vuong: I can’t wait to see all the great and terrible cosplay fashion. Sometimes the worst ones might be the funniest or rather ingenious at a second look. I hope to see some odd and esoteric comic book and cartoon references.

Lian Partridge: I’m most looking forward to seeing the pro-level cosplay…and maybe trying to guess which masked cosplayers are celebrities walking the floor!

Kevin De Leon: As a longtime fan of comics and their portrayal in film, I am very excited to have the opportunity to experience Comic Con firsthand this year and to represent UCLA Extension. In particular, I am excited that UCLA Extension will have its own panel this year!

Chae Ko: I’m looking forward to all the new One Punch Man cosplayers this year.

Jeff Bonnett: now that we have a bigger team, I’m looking forward to branching out and exploring the events outside of the convention center, which normally we don’t have the resources for, to hopefully connect with fans and aspiring artists and content creators.

So there you have it! Be sure to follow our adventures on social media via the hashtag #UCLAxSDCC, or subscribe to any of these accounts for updates!