Success: Sam Polk Publishes For the Love of Money A Memoir 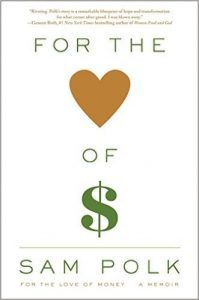 If Sam Polk’s story – of Wall Street trader turned nonprofit founder – sounds familiar, you probably read his viral 2014 New York Times piece on wealth addiction. Now, Sam has published For the Love of Money: A Memoir, which Forbes calls “compellingly written…unflinchingly honest…a book that seems, on the surface, to be about finding professional fulfillment, ends up being, at its core, about the inner journey Polk undertakes to redefine success.”

When he came to the Writers’ Program, Sam had a self-described “400-page first draft disaster.” Working with Jennie Nash, Sam crafted a memoir that was then snapped up by Scribner. Sam calls Jennie “one of the sharpest, most competent editors I’ve ever had. I’ll always be grateful to the UCLA Extension Writers’ Program for introducing us.”

You may have also seen another of Sam’s New York Times pieces last month when his article “How Wall Street Bro Talk Keeps Women Down” appeared in the Sunday Review Opinion section. Or maybe you caught the article in the Times’ Business Day section on his latest endeavor, a restaurant concept called Everytable that brings fresh, nutritious food into urban food deserts. Sam is everywhere right now, and we couldn’t be prouder.