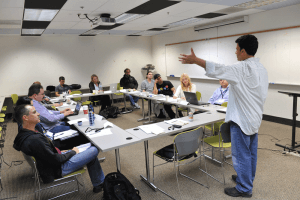 As both a staff member and student of the Writers’ Program, I’ve had the privilege several times now of sitting in on classes led by instructor Corey Mandell. In fact, his ten-week WP course was the first I took, and it completely changed the way I viewed writing. See, there are certain terms I’ve heard float around amongst students here over the years. Some call it “drinking the Corey Kool-Aid” because every student that walks away talks about the class as if they’ve joined a new screenwriting cult. It sounds too good to be true. And why is that?

The simplest way I can put it, is that Corey has devised a very unique, scientific system of conceptual tools for writers and the stories they create. It’s a completely unorthodox method, far removed from the traditional Syd Field/Blake Snyder paradigms. The only analogy I can think of would be that of physics. Beneath the surface of our every-day lives are particles of matter governed by a system of universal laws, invisible to the eye. The same goes for stories. Every film or television episode is comprised of a sequence of scenes, and within those scenes are invisible laws which, at the subatomic level, govern what audiences process as a successfully orchestrated drama. What Corey does is deconstruct story, break it down into learnable laws and components, and teach this system of writing from the ground (scene) level up, piece by piece. In the current marketplace of television — where more unique voices are sought after for original series ideas, and as more distribution outlets become available – I believe Corey’s workshop is even more valuable and relevant. In Corey’s own words, “Forget writing specs of existing shows; nobody’s reading those anymore. The key is being able to write a truly pitch-perfect authentic script. Those who can do this will have careers. Those who can’t will be ignored. I’m excited to be offering a one day class teaching the skills and tools required to write exactly these kind of highly sought-after scripts.”

Corey’s method is a highly empowering, highly immersive perspective that breaks through conventional wisdom, and I think every writer should take part in it at least once. Not yet convinced? Then listen to this hour-long podcast episode from SellingYourScreenplay.com. I’ve heard many interviews with Corey but this is the most succinct one out there that touches on every aspect of his methods – from why most writers fail, to a writers’ process, conceptual story tools, and breaking into the business, all of which will be elaborated on during class.

According to Corey, “There’s never been a better time to be a TV writer. We’ve never seen as many buyers of original material (74 at last count), nor as many staff writing jobs. But we’ve also never seen as much fierce competition. So it’s essential that writers looking to seize these opportunities go about it the right way.”

Strike while the iron is hot and sign up now for Corey’s one-day course held at our DTLA facility, on Saturday, October 22.

More information on Corey Mandell can be found on his current website, here.