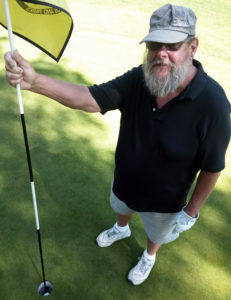 AND he made a hole in one wearing a WP hat!

Lou has a story, “Chile Verde!,” from the NYC home cooking Website Taste this month, which includes a recipe. He also has a story “Crab Dinners” forthcoming in the Akashic Book series Santa Cruz Noir.

Additionally, on March 18th Lou and his wife, poet Alison Turner, inaugurated a new reading series at Beyond Baroque, curated by fellow Writers’ Program instructor and poet Suzanne Lummis, Married to the Word- L.A. Literary Couples before a sell-out crowd.

Lou has taught in the UCLA Extension Writers’ Program since 1989. “I also taught at UC Santa Cruz, Antioch University and the University of Redlands, but those were classes with undergraduates – mostly 18-22 year olds – and I quickly found out that they didn’t have much to say or life experience to draw on. Writing is one of the few professions in which age and experience are an advantage. When I first started teaching at the Writers’ Program, I was enthralled by the prospect of teaching grown-ups who were there because they wanted to be there, not just looking for what seemed to be an easy grade. The reason I teach here is pretty simple: the excellence of the students. The Writers’ Program is the largest feeder program in the world for quality MFA programs, and one thing I tell my students when they leave for their MFA programs is that they shouldn’t be surprised if the quality of their peers in workshops at these elite institutions is about the same as their WP workshops, or maybe even not quite as good. The reports back confirm that. I also love teaching more mature writers who are changing careers or changing the game in retirement. They work hard, they are committed and it’s wonderful, every quarter to see them bloom. The list of accomplished professional writers, who got their start in the Writers’ Program, is a pretty staggering one. The quality of those students is what keeps me coming back.”