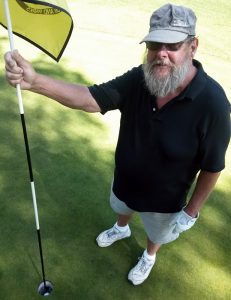 Lou, his hole-in-one, and a Writers’ Program cap: photo by Douglas Kerr

Longtime instructor Lou Mathews (who’s been teaching since 1989, including the advanced course Short Story III this fall) sat down with us recently for some insight into his experiences and what makes teaching with the Writers’ Program so special.

What sparks your Creativity?

Reading someone else. Reading begets writing. The other spark, for me, is usually a line of dialogue – something overheard or imagined, sometimes remembered. I’ve written a lot of stories to get to that line of dialogue. There are two kinds of people who have voices in their heads, Paranoid Schizophrenics and Writers. The difference between those two groups is that Paranoid Schizophrenics listen to the voices in their heads and follow their commands. Writers just turn them into stories.

What do you do when you have to work, when you don’t have time or energy to write?

Life does overwhelm us. I always recommend a change in routine. In the early 1980’s I moved back to Los Angeles. My wife, Alison Turner, was in her first year at UCLA law school. I worked at a Nissan dealership in Canoga Park, as a mechanic. That was how I worked my way through UC Santa Cruz. The job was brutal. We were on commission, so it was constant hustle. On the worst days, you skipped lunch, you skipped breaks. I got worn down pretty quickly. I was trying to rewrite a novel (L.A. Breakdown – An L.A. Times Best Book of the Year when it was finally published in 1999), but trying to pick up that thread at the end of the day, particularly when it was your night to cook, was pretty hopeless. 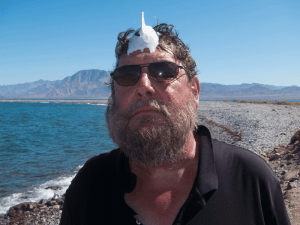 I remembered something an old mechanic that I’d worked with in Santa Cruz once told me.  Bert Moulton was his name. He’d survived the Depression and he told me about a strategy that he’d learned back then. “Pay yourself first,” Bert told me. Simply put, that meant that, yeah, you owed everybody, the situation was hopeless, but before you paid everyone else some portion of what you owed, you paid yourself first. You put aside a quarter, or fifty cents or a dollar into savings, and that made a difference. You felt that you were working toward something, something of your own.

My adaptation of Bert’s strategy was to change my routine. I started getting up an hour early, 4:30 instead of 5:30. That time was my own. At first, I mainly read, but eventually I started to write. I couldn’t get back to the novel. Instead, I wrote about what was around me, working in Canoga Park. That hour of my own changed the way I looked at my day. I started writing at work – just notes, on shop towels, on napkins. Then I would come home and put those notes on a legal pad stolen from Alison. Eventually, I started dreaming about what I was working on, and waking up with lines and solutions to problems that had seemed insurmountable the night before. I was engaged. In the three years that I worked at Jim Bess Nissan, I also wrote a dozen short stories, eight cover stories for the L.A. Reader, including a novella, The War Lover, that took up an entire issue and enough other credits with the Reader, The LA Weekly and some travel magazines to start on a freelance career once Alison graduated.

Change your routine, is another way of saying, honor who you are, respect what you do, set that time aside for yourself. That investment pays you back in ways that will sometimes startle you, when you look back. 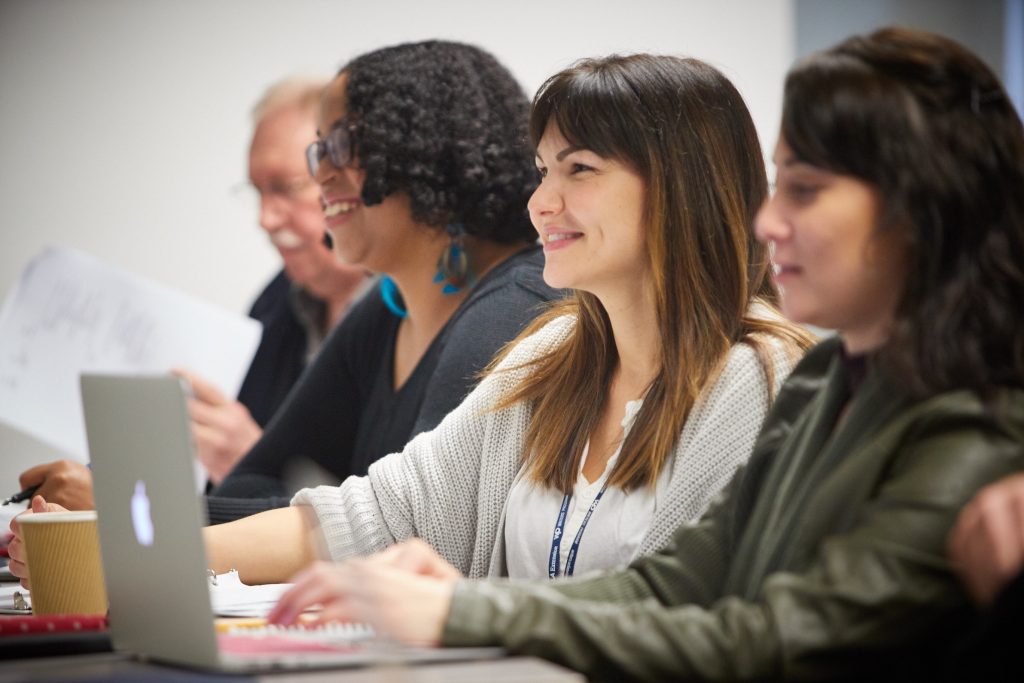 What do you enjoy most about teaching for the Writers’ Program?

I taught undergraduates at UC Santa Cruz, University of Redlands and Antioch University. These were 18 to 21 year olds, and you learned pretty quickly that even if they had talent, they didn’t have much to say. Writing is one of the few professions in which age and experience are a virtue. I love teaching grown-ups, and by grown-ups, I mean the committed. They may be in their twenties, but they are in my class for a reason. They want to become writers,

Over the years, particularly in the 90’s, I was asked to apply for tenure-track jobs. I was never tempted. It meant giving up the kind of students I was rewarded by every quarter. When students that I’ve worked with are accepted into MFA Programs, and some of them are accepted into the best Programs in the country, I have to explain to them that their expectations about their peers in these programs may be inflated. What I say is, “Don’t be surprised if you find your classmates in the Writers’ Program were as good, or better, than your MFA classmates.” When I hear back from them, they tend to agree..

What, for you, makes a student exceptional?

Humility, a solid work ethic, a passion for reading, a good ear, a good eye, delight in wordplay, empathy, a little madness. 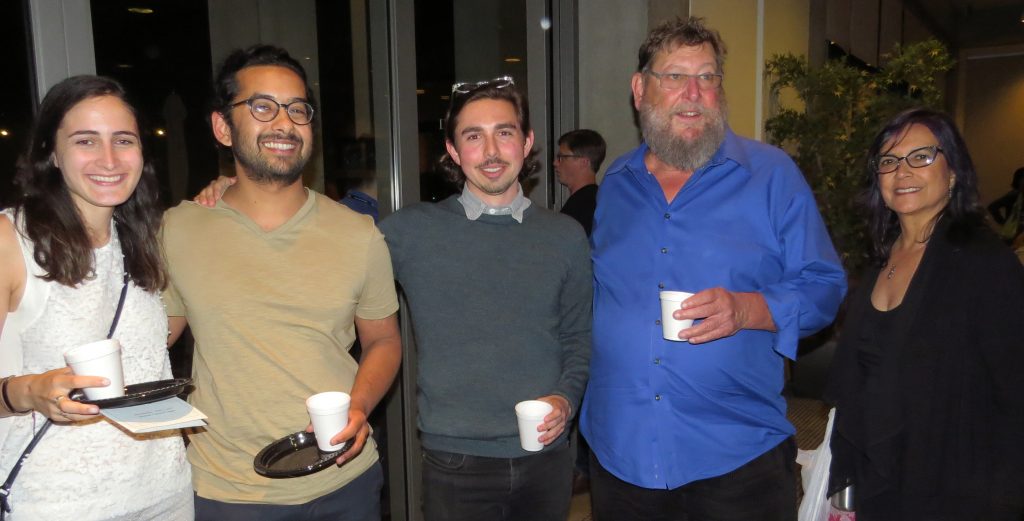 What question do you get asked most by students (And what’s your answer)?

There are three.
Could you read this? If you wrote it during our ten weeks of class, yes. Don’t abuse me with the novel you wrote three years ago.
How do I get published? Same way you get to Carnegie Hall, practice, practice, practice. Oh, and you have to send your work out and develop thick skin. You have to test the market, otherwise, you’re just another unrecognized genius with great potential, who can maintain that potential into old age by never risking rejection.
Will you write me a letter of recommendation? Yes, once you’ve taken two classes with me.

And then there is the question that I always ask. In every first class meeting, for thirty years, I’ve asked the group, Why are you here? The answers can be grandiose (because I want to write a great book) or mundane (I’m blocked) with lots of gradations, but in thirty years of asking that question, no one has copped to the real reason, which I have to finally provide. The real reason you are here, I tell them, is because you don’t want to die.  Writers want to be immortal, they want to leave something of themselves behind.

You’ve been teaching with the Writers’ Program for quite some time. Over the years have you noticed any shifts in what students write or how they approach writing? 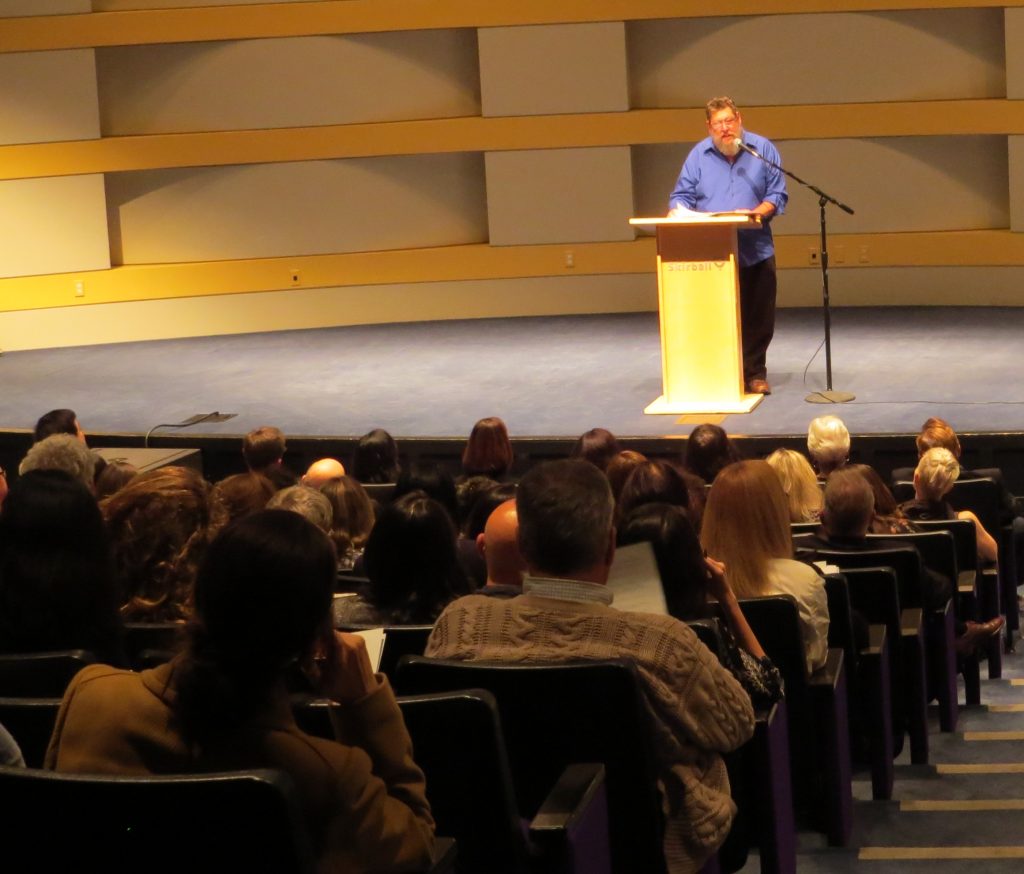 Lou reading at the 2017 Publication Party

What students write often follows trends. If every story you read in the New Yorker is written in first person, present tense, you’ll gravitate that way. There are other trends –  In the 80’s and 90’s I read a lot of alcoholic trailer park stories, then the obligatory abortion story, incest was hot for a while, drugs took a turn. This year, I’m reading a lot of dystopian fiction, which is a pretty direct response to current politics. But those are just trends, the best writers may reflect trends but don’t follow them doggedly.  Where you grew up, how you grew up remains the true source of good fiction.

The biggest shift in recent years is the emphasis on MFA’s. I see many more students who are committed to getting in to a good MFA program, as the only option for writers. That’s not the case. Some of my most successful former students do not have MFA’s, nor did they need them. At the same time, if that’s what you want, The Writers’ Program is a great place to start down that path. The WP is currently the largest feeder program in the world for MFA programs. In the past decade, students that I’ve worked with have been accepted into nearly every major program in the Country – Iowa, UT Austin-Michener, Michigan, Columbia, NYU, Cornell, Syracuse, UC Irvine, Oregon. Two classes at the Writers’ Program is a pretty good investment when the payoff, at places like Michener or Michigan is a 250-300K fellowship.

What has been the most valuable learning experience for you in teaching writing?

Finally understanding that you just can’t rule anyone out.  Every quarter, some writer, young, old, in-between, who maybe had one of the marginal writing samples when they applied, will crack a story that rattles my teeth.
You never get tired of watching writers bloom; I still thrill to the breakthroughs that happen in every quarter that I teach. 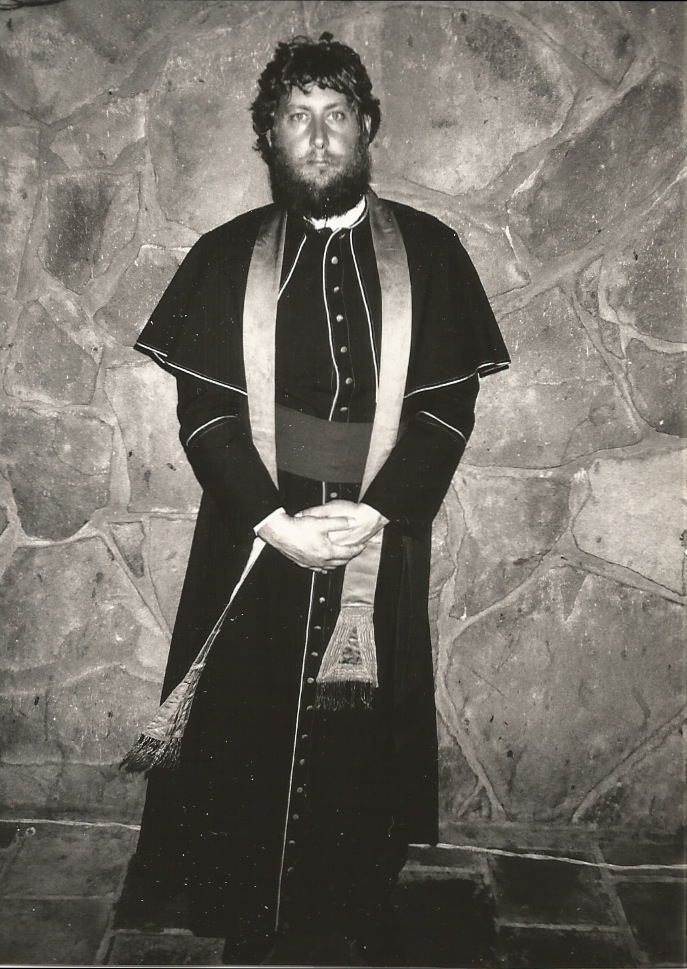 Lou in 1987 on the set of Walker, in Granada, Nicaragua

I started working for the Writers’ Program in 1989. I inherited a class. Cathy Coleman had proposed the class: Writing From the Right Side of the Brain. Cathy was a well-known writing teacher back then. Cathy got sick and passed the class along to a friend, and my editor at the L.A. Reader, Randy Michael Signor.  Randy called me up and said, “I’m supposed to teach this class, but I think I’m going to Seattle.” He’d decided to go back to his wife. I’d been teaching undergraduates and learned that I really didn’t want to do that. I looked at the catalogue and realized that I’d be teaching grown-ups. Made sense to me. Then I looked at the course description and realized I was lost. Writing From the Right Side of the Brain was based on a popular text for visual artists: Drawing From the Right Side of the Brain. To this day, when someone says, writing from the right side of the brain, I want to say: Is that your right or my right?
I diligently read the text that the course was based on, regurgitated about three minutes of that at our first class, and moved on to the course I teach today, which has a heavy dose of Flannery O’Connor and very little crystal hugging. Understand, I do believe in magic and that there is something larger than ourselves; every writer does. You cannot write without hope, but you also have to do the work.  That course made me commit to the program.  I’m still in touch with three students from that first class. One of them, Tom Curwen, has gone on to a very successful career at the L.A. Times. He’s been a finalist for the Pulitzer Prize for feature writing several times. The principles of fiction – scene, story, using the senses – apply as well to journalism as they do to fiction.

I do have to talk about why I am still here, still teaching in the program. My boss for nearly thirty years in the program was Linda Venis. She was a remarkable administrator and a remarkable woman, a genuine visionary. Whip smart, with a great cackling laugh that I can still hear. She truly valued writers and good teaching, and once you’ve been dealt with by administrators at most colleges or Universities, you understand what that is worth. I always thought that I would retire when Linda did. When Charlie Jensen was hired as the new head of the program, I took a long, hard look at where the program was going and decided to stay. Charlie’s focus is different, but so are the times. He is a writer himself and that gives me some faith, but I also like the courses that are being developed, and I still love the new students I face every quarter. It’s still a thrill to see someone break through on a story. My friends from high school, some of whom are long-retired, ask me how long I’ll keep working, and my answer remains the same: As long as they keep listening.