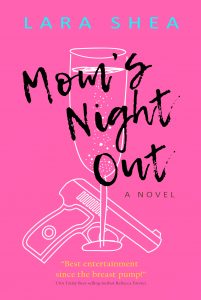 Former Writers’ Program student Lara Shea’s debut novel Mom’s Night Out was self-published in November of 2018.  It is the story of helicopter parent, Kelly Birkby, whose overactive imagination keeps her constantly on guard against threats to her young family–killer bees, the impending tsunami, roaming rabid dogs. But when her wallet is stolen and her beloved Southern California beach town becomes the target of an actual crime spree, she takes it upon herself to fight back by enlisting the most formidable force she knows: the moms of the town.

When Lara began Lynn Hightower‘s Novel IV class, her manuscript was three times as long as it should have been. Lara says, “Lynn taught me how to keep the action moving forward and to get rid of all that was holding that action back. It was hard at first, but with her expertise and lots of practice, it became easier.  Lynn was always positive and so much fun to work with, I’m so grateful I landed in her class.”

Congratulations, Lara! If you have a success story, we want to hear about it! Click here.