Every fall quarter, veteran television writer and longtime Writers’ Program instructor, Ed Scharlach, moderates a panel of colleagues and friends responsible for creating some of the best TV shows past and present. The panelists are comprised of working television professionals in both the one-hour and half-hour formats, all of whom discuss an array of topics including (but not limited to) how they broke into the business, what it’s like to worth with networks VS. streaming services, selling and developing pilots, striking a work/life balance, how they manage writing/producing/editing multiple episodes simultaneously during a single season, and what it’s like working on a hit TV series. 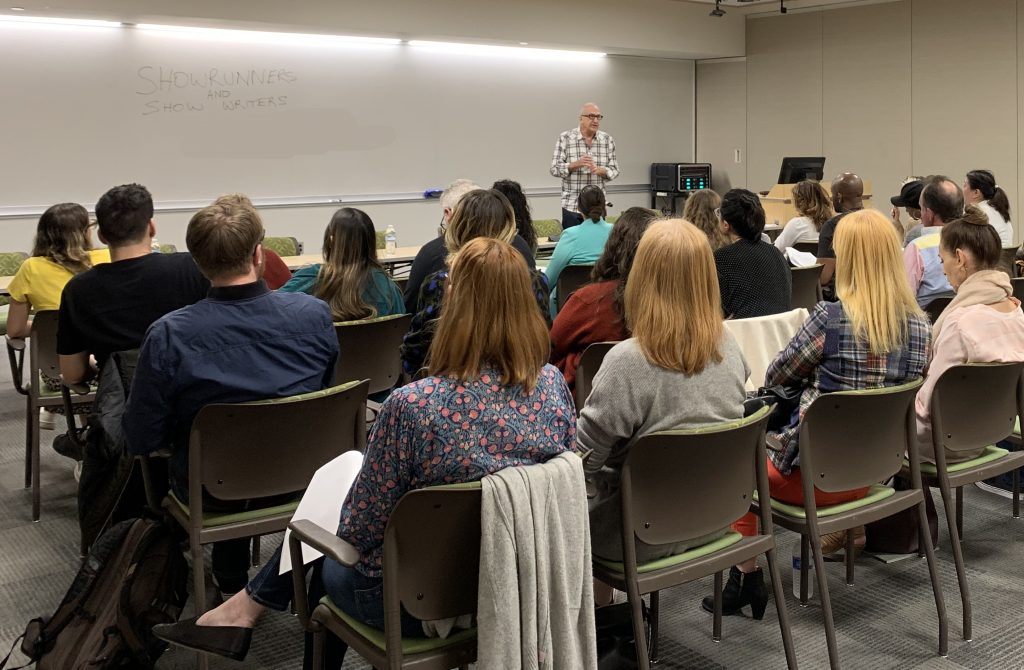 This year’s panel included Frank Cardea (NCIS), Gina Lucita Monreal (NCIS), Jim Krieg (DC universe DTVs), Adam Faberman (The Big Bang Theory), and Tiffany Lo & Ethel Lung (writing team, Blood and Treasure). Given this was a limited-enrollment event, students had time and freedom to ask in depth questions and have direct conversations with the panelists, unlike larger format, auditorium style panels. It’s a huge benefit to students in the TV writing program and we highly encourage enrolling every fall. Here are just some of the highlights and soundbites from this year’s event:

On how they got their start:

Jim Krieg made a Spiderman spoof as an NYU student, which led to a gig on the then-forthcoming Spiderman cartoon on FOX Kids.

Adam Faberman was inspired by a sci-fi film class at the University of Maryland, moved to LA and worked his way up from starting with an internship on the The Drew Carey Show.

Frank Cardera worked at Paramount, where a mentor connected him with George Schenck on a project, who later became his writing partner. The two started developing and selling projects from there and eventually became trusted showrunners for hire, leading to NCIS.

Gina Monreal has a theater background in Chicago, performed a host a day jobs including tech writing, moved to LA and was eventually accepted into the CBS fellowship program, which ended during the 2008 writers’ strike, but eventually led to her getting staffed.

Tiffany Lo & Ethel Lung both forwent their more stable degrees and met in LA while waiting tables and pursuing acting. On a lark they started writing a kids show which they shopped around to any connections they had and used to later get accepted into the Nickelodeon fellowship program.

On their respective careers, then and now: 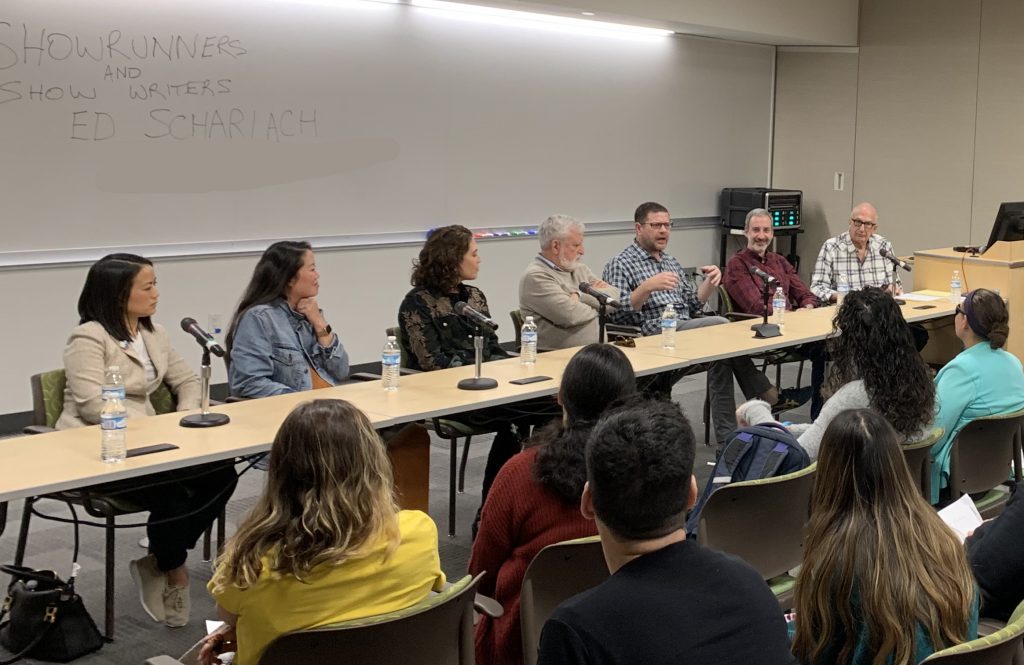 Jim explained how early on, it’s easy for writers to assume acquiring an agent is all you need, but that’s a myth. You first have to meet people, build your network, and get good at letting people know who you are.

Adam said sometimes becoming a production assistant is easier than landing a writers’ assistant position. It’s best to just get your foot in the door first.

Gina recommended when it comes to seemingly menial jobs, “don’t say no to anything”. She was an assistant at William Morris for one year, worked hard, and finally handed a script to her boss at the end of her tenure, only to receive a “I didn’t like it.” But she read a ton of scripts in that time and it made her a better writer.

Frank answered an audience question about starting as an older writer midway through another career. He said it’s not a weakness. Often one’s former profession and experience can be used to their advantage on the right show.

On getting people to read your material:

The entire panel had the same advice: contests, fellowships, build your network, seek low level assistants to agents/managers/producers who hustle and are hungry, and following the writing community on Twitter (even endorsing shameless DMs).

On the value of fellowships:

While the best case is getting staffed, Tiff and Ethel both expressed a key aspect not often discussed is that fellowships teach you how to market yourself. How to build your own personal story as a writer and tell it succinctly from beginning, middle to end.

On general advice for aspiring writers:

Jim: “You should be talented, and you should know how to type.”

Ethel, on submitting material to your industry peers even as an assistant: “be shameless.”

Frank, on maintaining longevity in TV: “As long as you’re having fun doing what you’re doing, that’s the key.”

Gina: “Remember that the people you work/write with will go on to other shows and remember you. Network and be willing to hustle.” 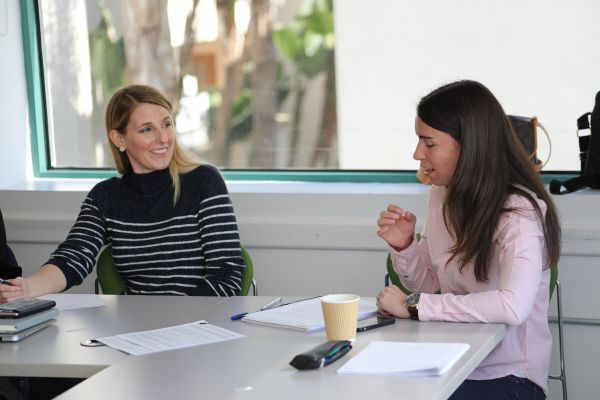 Tiff, on work/life balance: “[As a woman especially] don’t think you have to choose, or to wait to live your life.” (Both she and Ethel explained they have since had children during their career).

Ethel, on the same: “Family and happiness are number one. Your writing will follow, and be better for it.”

Frank: “Writing is painful. If it doesn’t hurt, you’re doing it wrong.”

Jim: “You have to enjoy the journey.”

Lastly, the burning question on everyone’s minds… What are they watching?

To name a few titles rapidly fired off: The Boys, The End of the F***ing World, Succession, Killing Eve, Watchmen, Fleabag, Better Call Saul, The Morning Show, The Crown: Season 3.

Thanks to the panelists and students in attendance! There was way more wisdom dispensed in the room than could be written here. Be sure to check in with the Writers’ Program for future panels, events, or seminars on TV writing!

“Showrunners and Show Writers” is held in November every Fall Quarter. As with all panels or seminars, advanced enrollment is required. For more information on this or other TV writing courses, contact Jeff Bonnett at jbonnett@uclaextension.edu or (310) 206-1542.