Three Novels by Female Authors to Add to Your Reading List

With the transition to an increasingly virtual world, reading has given me an opportunity to take my eyes off the screen for a while and allowed me to find a healthy “escape” without actually having to leave the house! Not to mention that the work of such talented female authors has inspired my own writing immensely and modeled what a wonderfully unique and diverse cast of characters can look like. Here are three novels I’ve been reading recently that have opened my eyes to the possibilities of the written word. 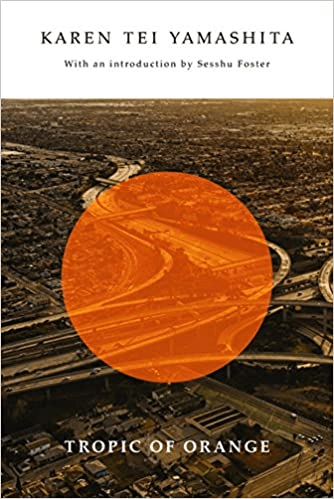 Tropic of Orange by Karen Tei Yamashita
Though published in 1997, the prose and content both feel very modern and in touch with the current ethos of our country. Set in Los Angeles and Mexico, Yamashita weaves realistic fiction with magical realism expertly. The dialogue is sharp, witty, and ironic and her characters are refreshingly real and vibrant. She juggles a cast of seven characters who each contribute a portion of their narrative over the course of seven days, culminating in a final grand-finale event which causes all of their paths to intertwine. The cast includes Gabriel, a Chicano news reporter, and Emi, his Japanese-American television executive girlfriend; his housekeeper Rafaela, who works to maintain his second home in Mexico, and her estranged husband Bobby, an immigrant from China who poses as Vietnamese. The novel deals with borders and boundaries: cultural, physical, and metaphorical, that divide and define the individuals who subscribe to them. We see a homeless ex-surgeon conduct the orchestra of freeway noise on LA’s harbor freeway and an orange that has been grown on the Tropic of Cancer actually bend the rules of time and space. It’s a wild ride.

Published in 2015, this is Gyasi’s debut novel. A historical fiction in the form of a collection of linked short stories, Homegoing chronicles the lives of the descendants of half-sisters Effia and Esi, who were born into the Asante and Fante tribes of 18th-century Ghana. While Effia’s descendants remain in Africa, Essi is captured by a slave trader and we see her descendants live through slavery in the South, segregation in Harlem, and discrimination in various periods and places until the present day. Gyasi embraces some supernatural aspects of African tradition and utilizes them to illuminate the reality of African culture and spiritualism, bringing a touch of magical realism to what is haunting account of the aftermath of the African slave trade and American slavery. Though the scope of the novel is expansive, each individual character is written intricately, and each is clearly a product of their particular moment in time. We see a man, “Two-Shovel H,” shoveling coal after being sold into debt servitude, we see his daughter running away to become a gospel singer, and her son turn into a drug addict who ends up working for the NAACP. This novel is as beautiful as it is sorrowful, and deftly manages demonstrate the effects of slavery and tribalism as they ripple through multiple generations of one family.

The House of the Spirits by Isabel Allende

Another family chronicle rooted in historical fiction, this novel from 1982 has become a world wide classic. It details the lives of four generations of the aristocratic Trueba family, whose various members are involved in the liberal revolution and the conservative counterrevolution in late 20th century Chile. Allende expertly threads a touching family narrative—and a stunning, supernatural one at that—into the context of a country riddled with political turmoil and class warfare. We come to love (and sometimes despise) several characters throughout the novel, including Esteban Trueba, the volatile patriarch of the family whose authoritarian antics spur on the need for reform in the country, his clairvoyant wife Clara, whose eccentricities allow her to communicate with ghosts and predict the future, their daughter Blanca, who falls in love with a leader of the socialist reform movement, Pedro Tecero, as well as their daughter Alba, who becomes an integral part of the rebellion herself. For anyone unfamiliar with Allende, I can’t recommend this sprawling, evocative, sometimes highly humorous masterpiece enough.

Hopefully these recommendations will provide some writing inspiration, especially if working in the genre of historical fiction or with elements of magical realism. In any case, these female authors offer some of the most powerful and profound prose I’ve read to date, and picking up any one of these novels will provide hours of page-turning entertainment. Happy reading!

Noemi VanSlyke is a third year student at the University of California, Los Angeles. She is studying English Literature with a concentration in Creative Writing and she is one of two work studies at UCLA Extension’s Writers’ Program.