The Writers’ Program often shares success stories of our students, alum, and instructors. One of the great things about having instructors who are active in their field is their inside knowledge of the writing biz. It’s also great because they constantly have new projects in the works – genuinely, too many for us to keep track of them all! With over 200 active instructors, we could feature one every working day of the year. Alas, we only have the bandwidth to cover a handful here and there. However, here’s a sampling of what some of our instructors currently have in the works:

Donald Martin recently wrote the script for an adaptation of a Nora Roberts novel that filmed in March. It was also recently announced he is adapting Bernie Hafeli’s Bear Season, which is currently assembling its cast. 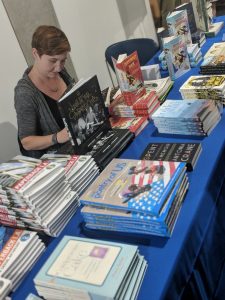 Francesca Lia Block has a new audiobook being released exclusively on Audible. She’s also working on  , including the script for the adaptation of her novel Weetzie Bat.

Screenwriting instructor Koji Steven Sakai recently released a podcast where he and his collaborators attempt to explain the unexplainable.

Miguel Murphy’s latest poetry collection, Shoreditch, will be available in May.

Adam McOmber’s newest horror novel, The Ghost Finders, will be released in June, and already has buzz from Publisher’s Weekly.

Instructor-alum Natashia Deón will have a new novel in November, The Perishing, and recently had her cover reveal!

These are just a few of the projects keeping our instructors motivated and engaged to help the next generation of writers through continually creating themselves. Keep an eye on our site & social channels for more new & upcoming instructor projects! And if you want to hear instructors reading from works published in the past year, RSVP to attend our 27th Annual Publication party on June 9th — Always FREE, and now virtual for the first time ever!