Welcome new Writers’ Program instructors Joe Boothe and Garth Twa! Joe and Garth are both teaching sections of One-Hour TV I this Fall. Joe is teaching in our Remote Instruction format, with live Zoom class meetings, Wednesdays, 7-10pm PT (Reg# 382880). Garth is teaching in our asynchronous, deadline-driven Online format (Reg# 382882).
They sat down with us to offer some insight into creative life and their upcoming course.

WP: What sparks your creativity?
Garth: There is no one magical thing; there is no invocation to the muses or magic writing slippers–creativity, inspiration, can strike anywhere, for any reason. You must have zero-impulse control when it comes—I pull my car over if I need to write down an idea, a line of dialog, or even a character name, I reach into my pocket for a tattered piece of paper and start scribbling in the midst of 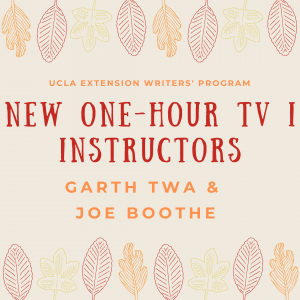 conversations, and I’ve woken up at 3 a.m. and had a character start talking. Did I want to go back to sleep? Or course I did, but my character wouldn’t shut up so I got up and wrote it down. If I hadn’t, I know (because it’s happened) that the material wouldn’t be there in morning. I can be inspired when I’m reading really great writing (like George Saunders’s stories—they make me itchy to start typing), or hearing great writing (while watching Coen brothers’ films, or Armando Iannucci TV shows) or, most importantly, an overheard—usually very odd—exchange in line at a grocery store, or on public transportation, or in a park…
Be open to characters and quirks and details around you, every day, everywhere. Be a glutton for experience.

Joe: My creativity used to be sparked by inspiration. Something I saw or thought. More and more, I work to train myself to have creativity sparked by discipline. We can’t control inspiration, but we can control discipline. Sitting down and deciding to be creative – that’s the spark for me.

What do you rely on for those times it’s difficult to find the time, energy, motivation and/or inspiration to write?
Joe: See above. You have to practice the art of sitting down and typing. Writing is like working out – it’s the days you don’t feel like doing it that you make the biggest gains. 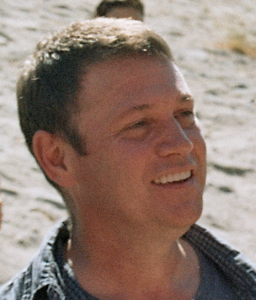 What’s your favorite book and/or movie?
Garth: Easily, in my top five films, are O Lucky Man! (directed by Lindsay Anderson, written by David Sherwin) and Magnolia (written and directed by Paul Thomas Anderson). Both, I think, are similar in their exploration of characters, both big and small, and the messiness of stories and lives. O Lucky Man! overwhelmed me when I first saw it because I didn’t know that movies were allowed to do what that movie did. The story is about Mick Travis (Malcolm MacDowell) on a wildly picaresque journey through every stratum of society, and seemingly every movie genre, including science fiction and the musical. It even calls into the question the making of the movie itself. It is bawdy, lewd, horrifying, touching, and hilarious. Writing a movie like that you don’t really need to write any more. Magnolia is also sprawling and multifaceted and genre-defying and, again, made me ask in wonder and in glee: are movies allowed to do that? Magnolia is full of grace notes and grace, brilliantly observed nuances, humor that hides tears, the heartbreak that allows for hope.
Favorite authors include George Saunders, who mines contemporary society and regional speech to create stories both hilarious and surreal; Kurt Vonnegut, Jr., whose humor and mischief playfully redefine what narrative is; Flannery O’Connor who can create a devastating portrait of a character with the most skillfully simple adjustments in syntax; and Mervyn Peake whose scope of imagination and breath-taking command of the language leaves me slack-jawed. To name just four.

What’s your favorite quote about writing?
Garth: I have a couple. One seems more uplifting, and one seems more hopeless (but isn’t actually). The first is from a letter Martha Graham wrote to Agnes de Mille: “No artist is pleased. There is no satisfaction whatever at any time. There is only a queer, divine dissatisfaction, a blessed unrest that keeps us marching and makes us more alive than the others.” I love that because we are always so hard on ourselves, and writing can be frustrating and demoralizing. But knowing that the dissatisfaction is “divine,” that it spurs us to be even better, that it drives our art to be greater, that is exhilarating.
The other, now that it’s set against the first one, doesn’t seem so bad. It’s from George Saunders: “Writing means basically failing everyday.” I find this heartening. It means, basically, that we don’t have to expect perfection when we sit down to write (or, more aptly, after we get up after having written). We can work and work all day, and it’s fine if it’s not faultless, or even usable. We did it, that’s enough; then we can rewrite it and fix it now that we know what’s wrong with it.  And, hey, if someone as talented as George Saunders can feel that way, who are we to give up hope?

What excites you most about teaching for the Writers’ Program?
Garth: What excites me about teaching for the Writers’ Program is the chance to spend time with creative people who are passionate about their craft; collaborating alongside students who are working in the realm of imagination, of possibility, is an awesome thing. There is no better experience than to come together to share stories, to help find the subtleties that bring a character to life, to work with other writers as they hone and realize their best possible work. It is literally watching as whole worlds are born. It’s inspiring. 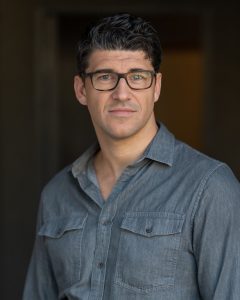 What do you hope your students get from your course(s)?
Garth: Mainly, I hope we can create a safe and creative space that allows all of us to gain the courage to explore all the possibilities of stories and ideas. Knowing that we are all in the same place—with the same self-doubts—the workshop will allow us to stretch ourselves, to try out new directions, and encourage each other to go to places we didn’t think were possible. Writing is all about trying, and there is no bad writing! None. There may be unfinished writing, but that’s what the writing process is about. A painter once said, when asked what it was like to be surrounded all the time by the beauty of his work, “99% of the time I’m looking at something ugly.” It’s the work that he had to put in, every day, that made it beautiful. We need to put stuff out there, we need to try things, to surprise ourselves, and then we need to go back and see which things worked, which things maybe worked less well. But you don’t know until you do it. You can never, ever judge, or dread, or be fearful of the steps you may have to take to get you where you want to be in your script. ALL THOSE STEPS ARE NECESSARY.

Anything else?
Joe: A lot of people think they should write because they have great ideas. A lot of people think they can’t write because they don’t have any ideas. Both are wrong. Ideas are a dime a dozen. Every amazing unique idea you’ve had was also had by five other people at the same time. Craft, skill, diligence, follow-through, perseverance, dedication, and most of all POINT OF VIEW… these are what make a good writer.  And they are all within your control (unlike ideas).

Thank you to Garth & Joe for taking time to share with us. Look for more instructor interviews coming soon!