The Young and The Reckless: Writing for Teens Speaker Interview with Henry Lien 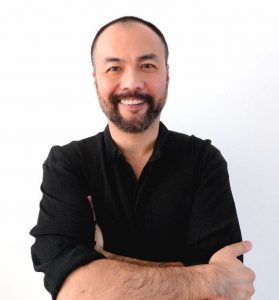 Henry Lien is a 2012 graduate of Clarion West. He is the author of the Peasprout Chen middle grade fantasy series. His short fiction has appeared in publications including Asimov’s, Analog, and F&SF, and he is a four-time Nebula Award finalist. Henry also teaches writing for institutions including UCLA, the University of Iowa, and Clarion West and won the UCLA Extension Department of the Arts Outstanding Instructor of the Year Award. Henry has previously worked as an attorney and fine art dealer. Born in Taiwan, Henry currently lives in Hollywood. Hobbies include writing and performing campy science fiction/fantasy anthems, and losing Nebula Awards.

Henry is one of the speakers for our YA Symposium, The Young and the Reckless: Writing for Teens, and a UCLA Extension Writers’ Program Instructor.

Q1: Do you use your experiences and knowledge as a previous attorney and fine art dealer to come up with new storylines and obstacles that your characters may face or overcome? In other words, how has your own life experiences come to shape your world of writing?

Not so much in storylines but in general skills.

Going from attorney to art dealer to author might seem like whiplash 90 degree career turns. However, they actually weren’t. As an attorney, my job was to reduce to compelling words the story of the client I represented. And the stakes were high — usually hundreds of thousands or millions of dollars. The best way to reach those deciding, especially juries, was by telling a compelling story.

As an art dealer, my job was to reduce to compelling words the vision of the artist I was representing. Potential collectors would see the art and have emotional reactions that they often had no words for. However, they needed more to open their wallets and pay tens of thousands of dollars than a wordless emotions. As an art dealer, I often gave them the words that helped to express their responses. The words helped them enter the art and make their feelings real in a way that gave them enough comfort to open their wallets. Further, I learned from my artists craft elements like composition, especially the importance of negative space, which has been invaluable in my approach to scenecraft in my novels.

Thus, being an attorney was about words and high stakes.

Being an art dealer was about words and composition.

They funneled quiet effortlessly into my work as an author. Those seemingly wrenching career turns were actually quite painless and natural.

I’m also a big fan of self-reinvention, generally. I applaud every one who is looking to re-invent their identity and give the mic to a part of their soul that has had to stay silent. It’s part of why I love the Writers’ Program, and UCLA Extension in general, so much. They’re about self-reinvention. And having lived an entire other life before turning to writing means you have life experience to draw from. I’m a big fan of living before writing. A life unexamined is not worth living. But a life unlived is not worth examining.

Q2: Your Peasprout Chen series features Wu Liu, a sport that innovatively combines figure skating and martial arts. Where did you get the inspired idea to combine these two sports?

I got sucked into Olympics figure skating coverage. The coverage always emphasizes the human interest aspect, and squeezes the drama out of the stories of grueling sacrifice, lost childhoods, etc., that all come down to a few minutes of performance on the highest stage possible under the most pressure imaginable. Who can resist so gripping a setup? Further, no sport does juicy and outrageous scandal like figure skating does.

But the sad, bad things that happened to me in figure skating and kung fu classes made me realize that I had happened to pick two sports that rewarded balance and flexibility far more than brute strength. I was thus writing about an invented sport that elevated kid power and girl power. I was writing about how different things reward how we are different, including how we are built differently, and how seeming disadvantages, such as being smaller, can be great advantages, depending on the context. Thus, I was also writing about ability and how it is defined by environment, and I was writing about the theme that heroes come in all shapes and sizes.

Q3: In your workshop, we will be hearing about ways to reshape and avoid info dumping in our writing. What would you say is your favorite and most used way that you utilize this skill?

So hard to choose, as I’ve collected a bag bulging with infodump-hiding tricks over the years. I’d say my favorite is arguments. When we argue IRL, we tend to dump things into the argument that the person we are yelling at already knows. That’s because the argument is often not just about the discrete thing that is putatively the subject of the argument, it’s hauling out the entire history of resentment or disagreement between the two arguers. For those reasons, we expect to hear infodumps in arguments. For that reason, an argument is a wonderful place to hide an infodump in fiction.

Q4: What’s the one piece of advice you’d give to the writers attending the symposium?

Enthusiasm makes the world fling its doors open to you.

Henry’s lecture for the symposium is titled: Hiding the Infodump and Fluffing the Scenecraft

Many writers neglect scenecraft in their work. Scenecraft includes elements such as blocking, visual tableaux, power dynamics, use of negative space, and strategic deletions of sight, sound, ability, or knowledge to make scenes more powerful and unforgettable. In this workshop, you learn how to hide infodumps that pack tremendous explicatory firepower but create a more graceful story. Students will leave the workshop with a practical list of tools to gracefully hide their infodumps and make their scenecraft more memorable. There’s lots of fun and free stuff on Henry’s website, like a little video of that time Idina Menzel and Henry performed one of the PEASPROUT CHEN theme songs at his book launch.