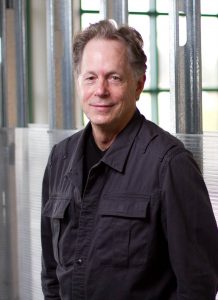 Screenwriter, director, and producer; WGA member whose feature film credits include Beetlejuice, The Addams Family, and The Little Vampire. Mr. Wilson’s television credits include Tales from the Crypt, The Year Without a Santa Claus, and Aliens for Breakfast. He previously worked as a story analyst for Columbia, Warner Bros., Paramount, and Universal.

My goal as your teacher is to inspire leaps of imagination by creating a classroom environment that resembles an awesome story conference—the kind myself and my partners experienced while creating Beetlejuice. First, that means we’re allowed to be strange—I’ll encourage your creative quirks and far-out ideas, as long as they’re entertaining and help to tell your story.  I’ll be your guide for in-class writing assignments, role playing games, and group journeys through the dark realms that will keep you engaged and entertained while you’re creating your best story—ever! We’ll jump off the creative cliffs together. What I won’t be doing is lecturing for hours, hoping you’re staying awake. And even if we’re talking about the darkest story in the world I’ll make sure were having fun (if we’re not laughing, it’s not happening).  There’s a method to my madness, I promise, and I also promise that you’ll enjoy the ride.