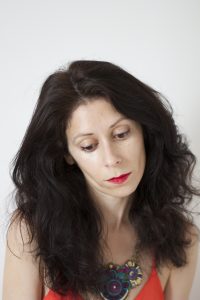 MFA, author of If This Is the Age We End Discovery which won the 2019 Alice James Award, and turn around, BRXGHT XYXS, and 20 Atomic Sonnets. Ms. Ben-Oni’s work appears in POETRY, APR, Academy of American Poets’ Poem-a-Day, Poetry Society of America, Tin House, and Guernica, among others. A recipient of fellowships and grants from the New York Foundation for the Arts, City Artists Corps, CantoMundo and Queens Council on the Arts, her work has been commissioned by the National September 11 Memorial in NYC.

Paul Celan ends his poem “Ashglory” with the formidable words: “No one bears witness for the witness.” Born to a Mexican mother and Jewish father, I spent a good deal of my childhood on the U.S-Mexican border, near the Gulf Coast. Another part of my life I spent on the border of East and West Jerusalem. I grew up learning not history, but histories, through writers who crossed genres, such as Mexican-American Americo Paredes who witnessed the ever-changing borderlands as a journalist, folklorist and novelist; as well as learning “code-switching” from Pat Mora, a poet, children’s author and essayist.

Popular culture also affected my work as a young poet in the late 90s, especially those with social-conscious messages such as the group A Tribe Called Quest, Kevin Smith’s Dogma or the Benetton ads that challenged social conceptions of sexuality, family and world hunger. While traditional mainstream news often would give me mixed messages about social unrest around the world, I learned about war through the Mexican oral tradition of narcocorridos alongside the songs of Israeli singer Aviv Geffen. This was all possible because, although I was raised in a Jewish household, my parents told me never to close myself off to the world around, but encouraged me to use poetry as a way to respond and to witness.

As a poet, I’m interested in how writing poetry can transform those who choose to bear witness into shape-shifters, the ever-adapters who absorb and question the environments and its histories around them. It’s very important to me that all students feel welcome. The classes here at UCLA Extension offer a chance to work with students who bring a wide range of different experiences in regard to poetry; some might not be familiar at all with the genre, while some perhaps have only read canonical poets and have little knowledge of contemporary poetry and trends, while others might be very familiar with multiple styles and traditions. It’s been my experience that this kind of environment generates some of the best discussions and workshops on the writing of poetry.