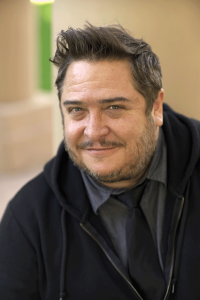 MFA, award-winning screenwriter-producer. Mr. Romero has written screenplays for Paramount, Sony, 20th Century Fox, Top Cow Comics, Telemundo and MTV. While Mr. Romero is probably best known for writing teen musical comedies set in shopping malls (The American Mall) and revenge thrillers about Mexican death cults (Not Forgotten), he is also the author of two darkly-funny books of modern poetry. Mr. Romero is also a longtime member of the WGAw with a BFA in film theory and criticism from San Francisco State University and an MFA in screenwriting from AFI.

“Being a writer is like having homework every night for the rest of your life.” – Lawrence Kasdan

Coming from a solid background in film history, I definitely think knowing about what has come before is essential for anyone hoping to break new ground as a screenwriter in Hollywood. That said, I also realize that a lot of what has come before is often extremely problematic today. But I am encouraged by the influx of fresh, diverse voices in the industry right now and my mission in the classroom will be to help you use the foundational tools of Hollywood narrative storytelling — structure, plot and character — to find, develop and hone your own truly unique voice as a screenwriter. Collaboration is king in Hollywood and I look forward to transforming my classroom into the coolest, most inclusive, forward-thinking writers’ room in town. Working together in the safe space of a classroom, we will brainstorm, break your stories beat by beat and channel the essence of what makes you tick as a screenwriter (and a human!) into first drafts that truly shine.