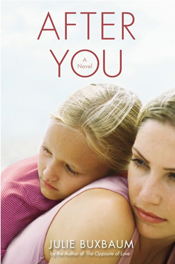 Julie Buxbaum recently published After You, her second novel, which tells the story of Ellie Lerner, who, after the murder of her best friend Lucy on a Notting Hill street, travels to London to help Lucy’s eight-year-old daughter cope with the loss.

Jodi Picoult, New York Times bestselling author of My Sister’s Keeper, says “Julie Buxbaum writes with honesty and grace about the things we know about our friends and the things we wish we didn’t. After You highlights—beautifully and compellingly—the truth that sometimes we have to lose the people closest to us to find ourselves.”

After You follows on the heels of The Opposite of Love, which has been translated into eighteen languages and was released in paperback earlier this year. It has been optioned to film by Twentieth Century Fox with Anne Hathaway set to star.

Julie explains that her Writers’ Program classes were “invaluable to my growth as a writer. I made amazing contacts and friends—I’m still in touch with all of my teachers—and learned the essential craft of novel-writing.”