Success: A White Elephant in the Room 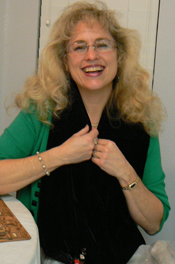 Susan St. Peters, who has taken more than 20 Writers’ Program classes over the years, had a very successful 2009. Her script, White Elephant, about a troubled teen who is sentenced to community service working with elephants, won Script Savvy’s September 2009 contest and 3rd Place in the Story Pros Screenwriting Contest (family category). In addition, her script Pandamonium received Honorable Mention in Script Savvy’s July 2009 contest.

“I received great insights into how to improve White Elephant when I took John Doolittle’s Advanced Rewrite class and Barney Lichtenstein’s Writers’ Studio course. These instructors have helped me in unique ways. John’s class helped me delve deeper into character motivation to ensure that the characters’ motivations were consistent. Barney ‘s class enabled me to workshop the story and get instant feedback from the instructor and other writers, often revealing ways to take scenes to a new level.”

Susan is an Associate Professor of English at Riverside Community College where she teaches composition, film, literature, mythology, and screenwriting.