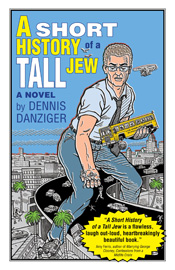 “Third generation” Writers’ Program alum Dennis Danziger who is also the husband of Writers’ Program instructor Amy Friedman, has reason to celebrate. His novel, A Short History of a Tall Jew, was released by Deal Street Press in February.

A Short History of a Tall Jew is a dark, comic novel about 39-year-old Philip Lachman who, despite having no leads, promises his two teen-aged children that he will find a loving step mom for them no later than Valentine’s Day.

“I had a big mess of a first draft of ‘Short History’ when I enrolled in a novel writing class with previous Writers’ Program instructor Mike Cahill. That class and a subsequent one with Mike provided the structure, critique and community I needed to begin the long process of re-writing. Without the UCLA Extension Writers’ Program, I doubt I would have finished the book. Mike Cahill was a Writers’ Program student who studied with instructor Claire Carmichael. And thus I’m a third generation UCLA Extension novelist.”