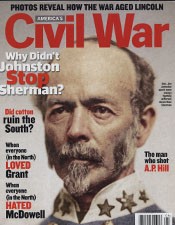 Brad Forbush’s article, “The Three Ponies of Company B,” was published in the January issue of America’s Civil War. Brad wrote the article—about three Civil War soldiers who promised to look out for each other and did so during the battle of Second Bull Run—in Roberta Wax‘s Writing Nonfiction for Publication course.

“Roberta was wonderful. Her keen editing skills made my story better. The feedback from the other students was encouraging and often pointed me in the right direction. I waited a year before submitting the article to a publisher. The editors at Weider History Group immediately expressed interest in running the piece, and liked it so much they paid me for a feature.”