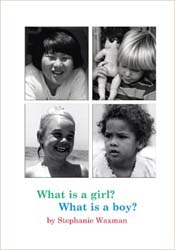 Writers’ Program instructor Stephanie Waxman’s book, What is a Girl? What is a Boy? is now available in paperback only on amazon.com. The title, which was published over 30 years ago in the United States, has come under fire over the years for its open approach to sexuality education, even making the “banned books” list in one town, along with Sylvia Plath’s The Bell Jar and Kurt Vonnegut Jr.’s Cat’s Cradle. Despite the controversy, critics have spoken positively about its no-nonsense approach. The New York Times hailed it as “a simple, straightforward, cut-through-the garbage explanation of what does—and doesn’t—make a boy or a girl.” The West Coast Review of Books lauded the book because it “speaks to a young child’s natural curiosity about the human body, with simplicity and beauty, without pretension or embarrassment.”

Stephanie has taught for the Writers’ Program for over 10 years. When writers get stuck, Stephanie suggests, “Run to a Master teacher, like Tolstoy or Dickens.” Lovely advice, Stephanie, and congrats to you!