Success: Where Are They Now? 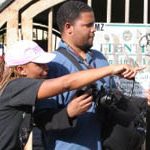 It’s always a thrill when students let us know they’ve reached their goal of publication or production. As novelist Kim Wright recently put it, “you morph from the writer—who stumbles around in her bathrobe until noon, muttering—into the author, who is expected to be articulate, outgoing, perfectly dressed and media ready.” We managed to catch up with a few of the students we’ve previously featured in our “Student and Instructor Success Stories” column to see what they’ve been up to since casting their bathrobes aside.

Donna Sozio was featured in October 2007 for her humorous dating advice book, Never Trust a Man in Alligator Loafers, which was published by Citadel Press. Donna credited instructors Les Plesko and María Amparo Escandón with helping her succeed.

Since then, Donna has shared her dating advice on over one hundred national media outlets, including The Tyra Banks Show, The Early Show, GMTV, Good Day LA, and Fox News. Her second book, The Man Whisperer, was published in 2010 by Adams Media. She’s also a successful publishing consultant.

Ligiah Villalobos was featured in January 2008 after a bidding war between five studios ended in worldwide distribution of her film, “Under the Same Moon,” by Fox Searchlight and The Weinstein Company. Villalobos took her first step toward success with a course taught by instructor Steven Wolfson.

Since her movie came out, Ligiah has developed several projects, including a script called “Diego Ascending” at Ventanazul and a seven-hour mini-series about Mexican-Americans at Overbrook Entertainment. She’s currently writing a musical for Nickelodeon and a drama for Hallmark Hall of Fame, both with Big Pita Lil’ Pita Productions. She also teaches animation workshops, most recently at NYU, Singapore.

Nia Malika Dixon was featured in January 2008 after winning wide audience acclaim and official selection at the Baltimore Women’s Film Festival for her short film, “Temporary Loss of Power.” She went on to enroll in the Certificate Program in Feature Film Writing where she met her “mentor & teacher,” Ron Suppa.

Since then, Nia has written and directed another short film, “City In the Sea,” and a web series, “Chrysalis: An Urban Web Series.” She’s currently conducting a campaign to raise money for her next project, Chrysalis, a feature film.

Former Kirkwood Award winner Vincent Precht was featured in March 2008 after enjoying the publication of his short stories “The Daughter of the Bearded Lady” in TriQuarterly and “Clippings” in Indiana Review. Vincent thanked instructor Paul Mandelbaum, declaring him “a pretty witty guy.”

Following those successes, Vincent has been hunkered down and is writing a novel about a town called September in depression era Colorado.

Online student Lori Culwell was featured in December 2007 after a story she wrote in The Art of Creative Nonfiction with Gordon Grice was nominated for a Pushcart Prize. She went on to successfully sell her self-published novel to Touchstone/Fireside, an imprint of Simon & Schuster, by using social media.

In the last few years, Lori has written a book about marketing called “Million Dollar Website.” She also oversees a tech/marketing business in which she helps local businesses, authors, and others maximize their internet presence. She’s even returned to UCLA Extension as an instructor, teaching a website-marketing class in 2009.

Congratulations to all of our featured students, and best wishes for your continued success!

Kate Sipples is the Program Assistant for Creative Writing (Onsite).