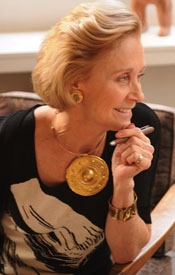 Exhibitionist: Earl Stendahl, Art Dealer as Impresario, is the story of April’s husband’s grandfather, who introduced modern art to the West Coast and brought Pre-Columbian art to a worldwide audience. One hundred years later, the Stendahl Gallery still operates in Hollywood and is a participating partner in The Getty Research Institute’s collaboration, Pacific Standard Time: Art in LA 1945 – 1980.

April says, “Carolyn Howard-Johnson‘s class on book promotion guided my marketing strategy. My writing life before authoring a book was in the television and film industry, so I depended on the Writers’ Program to develop new skills and new friends.”