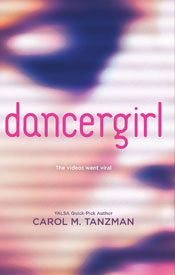 Writers’ Program student Carol Tanzman has signed a two book deal with Harlequin Teen! Dancergirl, a young adult thriller, was published in November this year, and the second book, Circle of Silence, will be released in August 2012. Carol worked on Dancergirl in Claire Carmichael’s advanced novel class.

Dancergirl tells the story of Ali, a passionate 16-year old modern dancer whose videos go viral. Starry Sky Books calls Dancergirl “An explosive read that will grab you from the very beginning and not let go until you’ve read the last page. I read this in one sitting.”

Carol says, “I took two of Claire Carmichael‘s classes (Novel IV and V). The most valuable lesson that I learned was to write both viscerally and visually: what should the reader see, feel, taste, hear as she reads. Describing Brooklyn in every scene in a way that truly came alive is one reason cited by my editor for buying the book.”