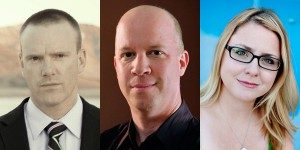 The Writers’ Program is pleased to announce the top three finalists of its 7th annual Feature Film Writing Competition. In alphabetical order, they are: Eric Borden (for his detective mystery “Fever”), Markham Cook (for his thriller “Restoration”), and Chandra Wicke (for her drama “Surviving the Captain”).

Eric, Markham, and Chandra will now be mentored one-on-one by Writers’ Program instructors Chrysanthy Balis, Cindy Davis, and Steve Mazur (respectively), who will help them polish their scripts for the final round of judging by entertainment executives. Check back in September when we announce the results.

In the meantime, here’s what our talented finalists had to say about their recent accomplishments:

Wp’: First off, if I were a producer, how would you pitch your movie to me in an elevator?

Eric Borden: A southern-fried, meth-addicted private eye takes on a U.S. Senator and his Big Oil crony to recover a kidnapped girl and finally put to rest the ghost of his dead daughter.

Markham Cook: An art restorer discovers a hidden message that proves a priceless Leonardo is a fake. He must stop the sale of the painting to the Met by confronting the art expert who stands to gain the most from the sale: his own father.

Chandra Wicke: A guy writes a tell-all book about his quirky family and [expletive] childhood, then has to go home and see the effects of the book on his family’s life. Once he gets there, he discovers that his little brother is a born-again Christian who is now engaged to marry the writer’s childhood sweetheart.

Wp’: What made you want to be a writer?

EB: This mess started when I was an aimless twenty-year old. It was a time when I could still shrug off the responsibilities of adulthood for the recklessness of an extended childhood. I was spending my nights getting into trouble and my days hiding in a movie theater trying to escape the Florida heat. I was watching any and everything that came to the theater, sometimes up to three movies a day. It was when I saw Braveheart that something in me shifted. The raw emotion that film stirred in me was something I’d never experienced before. I knew then that I wanted to be a part of something that could be so powerful on a human level.

MC: I’ve always loved telling stories, and love the reaction I get when a story is well told. I’ve spent a lot of time in editing rooms working on documentaries, and writing screenplays seems like an extension of that process.

CW: I was always that kid whose parents had to force her to go outside because I really just wanted to stay inside and read all day — the quiet kid who always came in last in the mile run and liked to write stories about her cats. In my elementary school days, I penned such classics as “Smokey the Summer Cat,” “The Cat That Ate Broccoli,” and my 22 page epic, “The Girl, The Cat, and The Wardrobe,” a wonderfully derivative story about a girl who crosses through a magical wardrobe into an enchanting fairyland where her cat can talk! I know, right?! It was really spectacular.

Wp’: How important do you think it is to showcase your work through a competition like this, and do you have any advice for students who might be interested in participating in the competition in the future?

EB: Winning this thing is the writing equivalent of walking into a saloon, finding the toughest dude there, and punching him right in the mouth. I also think it’s an invaluable tool to gauge how you are progressing as a writer. I think most writers are looking for a sign they belong, a reason to keep toiling away, alone in the corner. The judges in this contest are working writers and industry professionals; those best suited to give you the signal. My advice to any student is just this… take the gamble. I mean, what’s your excuse for not entering? Nothing CAN happen if you’re not in the competition. And maybe, just maybe you win and all your dreams come true. Even if they do you’ll probably still have to toil away in the corner.

MC: This is the first competition I’ve submitted my work to, but it seems like an invaluable way to get a sense of how my work stacks up against others and a great way to get a little exposure. Being named a finalist is exhilarating and the wonderful bonus of this competition is the mentorship. The notes I’ve gotten from my mentor, Cindy Davis, have been eye opening, and have pushed me further than I thought I could go. My advice to other students is: participate! The competition deadline motivated me to rewrite the script and take it seriously. But if you do submit, sit down the next day and start something new. Don’t hang all your hopes on one script or one competition.

CW: This is the first time I’ve submitted work to a competition, so I can’t speak personally about what opportunities will come along, but I’m excited about the possibilities! One of the things that the UCLA Extension Writers’ Program Competition offers that I’ve never seen in other competitions is the chance for finalists to re-write their scripts with the help of a professional mentor provided by UCLA Extension. My mentor is Steve Mazur and the feedback and notes he’s given me so far have been invaluable. Once I got his notes, I went from hoping I wouldn’t have to read my script again for at least ten years, to being excited about the re-write process. I’m still in the middle of it, but I think that just the improvement to my script alone has made it worth it. As far as advice for students interested in participating in the future: DO IT. You have nothing to lose and everything to gain. Plus, competition deadlines are great motivators.

The Writers’ Program would also like to congratulate this year’s Feature Film Competition Semi-Finalists! They are (in alphabetical order):

“Traveling On” (Drama) by Jessie Wilson