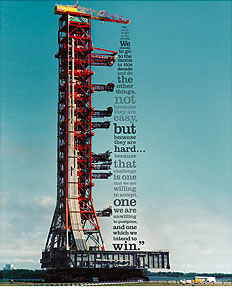 Sitting alone at my desk in the quiet hours of the evening watching the flashing cursor on the computer screen, I sometimes find myself lost in the difficulty of pushing those keys. For the uninitiated it would seem that this motion should be quite simple. But to transform an idea from concept into a fully fleshed-out story or screenplay requires a strength and tenacity found only in the deepest reserves of the human spirit. Writing, as they say, is hard, hard work. So why, in the face of so much difficulty, do we write? Perhaps the answer can be found in what I consider to be one of the greatest speeches ever given by a U.S. President.

Fifty two years ago, President John F. Kennedy stood before the world and promised that America would land a man on the moon before the end of the 1960’s. He reminded mankind of the challenges and hardships that would surely await us on such a technically daunting and arduous journey through the cosmos. To shatter our Earthly bonds on the most powerful rocket ever constructed, travel a quarter-million miles in each direction, land on the surface and return in one piece, was an endeavor that would require the sort of dedication, teamwork, and tenacity never before achieved in the history of the human race.

And why were we supposed to agree to take on such a difficult task? His answer: “We choose to go to the moon in this decade and do the other things, not because they are easy, but because they are hard, because that goal will serve to organize and measure the best of our energies and skills, because that challenge is one that we are willing to accept, one we are unwilling to postpone, and one which we intend to win, and the others, too.”

This brilliant speech serves as a reminder that often times, the best reason for doing anything truly spectacular in this life is because of the difficulty in doing so.

Writing is no exception to this truth.

The sooner a writer accepts this reality, the sooner he or she can make peace with it and begin to build the craft and know-how to overcome the inherent challenges of such an endeavor. Writing, much like sending a man to the moon, is a process to say the least. Long before we launched those Apollo astronauts towards destiny, mathematicians and engineers studied the work of previous masters to become the best they could possibly be in their chosen fields. So too must a writer study the work of those who wrote before themselves to understand the variety of techniques and tools at their disposal. Shakespeare, Hemmingway, Dickens – these are our Keplers, Newtons, and Wright Brothers.

We write drafts, take classes, and share our work with our peers knowing that the criticism we receive is integral to shaping an accurate trajectory of our story when it takes flight. This is our engineering, our calculation of planetary motion. Sometimes it means light revision. Other times it means tearing up the blueprint and starting over from scratch. But when we are faced with these difficult decisions we remain calm (or at least try to), gather our thoughts, and march boldly back to the page.

Regardless of whether we are multiplying numbers or stringing together words, we will inevitably face extreme difficulty. And when those moments come, the decision to keep going is often times just as tough. But it is in this decision that a separation is made between those who stare longingly into the cosmos and those who will travel amongst them. And by pressing those keys and steadily chipping away in the time we write, we soon will have our rocket ship.

— Brandon Covey is the Program Assistant for Creative Writing (Online and Events). He has an MFA in Creative Nonfiction.