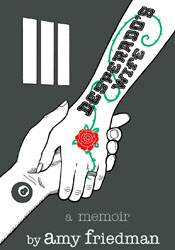 Writers’ Program instructor and creative nonfiction writer, Amy Friedman, was a guest on the Katie Couric show last week where she talked about her new memoir, Desperado’s Wife, about falling in love and marrying a man in prison. Amy’s story is fascinating, and of course, we had to know more:

Writers’ Program: What was it like being interviewed by Katie Couric? And being on television!? How do you prepare for something like that?

Amy Friedman: There are many answers to this, but my husband, Dennis Danziger, has written a brilliantly funny piece about the months of preparation, and his piece is probably the truest answer.

It was 15 months between the time a producer at Katie first called me and the day I finally flew to NYC to tape the show, so I had all kinds of time to prepare. Dennis’s piece is laugh-out-loud funny but it’s also deeply true—and focuses in part on the many evenings he “played Katie,” (inquisitive Katie, sensitive Katie and appalled Katie) asking me questions, teaching me not to fiddle with my hair while I was answering. Also, just the week before I was to go to New York to tape, I was working with a friend who is a director and makes films for nonprofits; he taught me the importance of knowing precisely what my central message was—and for me it was the idea that prisoners’ families have never done anything wrong and yet are punished and judged only because they love someone inside. Keeping that ethos close to my heart was key for me.

I loved Katie—I’d been pre-interviewed by two of her producers, so I had some sense of what they were after. And I met Katie only when I walked onto the set to tape. But sitting next to her I felt in the presence of a deep intelligence and compassion. She had already taped another show that day—so she’d been at this for 6 or 7 hours—and she was smart and articulate and energetic, utterly admirable. Just wish we could have talked longer.

On the set, I didn’t feel as if I was on television—I felt as if I was in a comfortable room (dressed better than usual and with great makeup), with a lot of people (including two of my favorite cousins who came to the taping and who were seated in my line of vision), and talking to a smart, smart woman.

Wp’: How did being on the show affect book sales?

AF: It’s not clear to me yet how it’s affected sales—for a couple of days Dennis was paying close attention to my Amazon ranking, and the first two days Desperado’s Wife (which had sold very few copies) suddenly leaped to the top 100 memoirs on Amazon. I won’t know for a while yet how many sold books that translates to. The day after the Katie show aired, I was also featured on the top Aol.com stories and on Jezebel and was interviewed by Mona Gable for the Huffington Post.

Wp’: What sort of reactions have you gotten from friends, family and students after being on the show?

AF: My friends and family have been great—celebratory, funny, supportive. My Uncle Bob had to go to chemo just when the show was airing, and he made the nurses stop and turn on the TV and watch before they did his chemo. Neighbors taped it. My dad told all his friends to watch. High school friends have come out of the woodwork on Facebook to reconnect. And decades ago I was a camp counselor, and my campers (many of whom stay in touch) wrote to say a bunch of them got together to watch. Another friend had an “Amy watching party.” I’ve felt the love, in spades. And there’s been this: Eight people wanted to know where I got the shoes I wore on the show.

Wp’: Tell us why we should read your book—for those of us who haven’t yet?

AF: Everyone who has read it—with precisely one exception—has told me it’s a page turner and that it reads like a can’t-put-down-novel. In truth, although the setting is prison, it’s less a prison story than it is a “woman down the rabbit whole who climbs her way out” tale. Who doesn’t like to read about women who follow their heart and overcome the odds?

Amy is teaching Writing Memoir and Personal Essay weekend workshop this summer and will also teach fall and winter at the 2014 Writers Studio.

Alicia Wheeler is the Program Representative for Creative (Online) and Events. Contact her at awheeler@uclaextension.edu or (310) 794-1846.