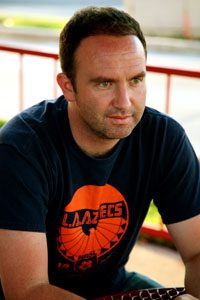 Writers’ Program student Jim Gavin rocketed to author stardom when his short story “Costello” was published in the New Yorker in 2010. Then, earlier this year, Simon & Schuster released his collection Middle Men, which includes the short story that put him on the map. In the past few months, Middle Men has been featured in The New York Times, the Los Angeles Times, The Boston Globe, The New Yorker, the San Francisco Chronicle, and the Los Angeles Review of Books. This fall, Jim joins the Writers’ Program as an instructor teaching Introduction to Fiction Writing. I recently chatted with Jim about what it’s like to experience “overnight success” after many years of hard work, his next project, and good old fashioned reading.

Writers’ Program: What does it feel like to have your first short story collection praised far and wide after years of honing your craft?

Jim Gavin: In high school the bank made a $200 error in my favor. I sat on the money for a few weeks, waiting for them to fix it. Finally, I decided to spend the money and I bought a new stereo for my Ford Tempo (I got a nice employee discount at K-Mart). For the next few months, I enjoyed the stereo, but I also felt like a fraud and I lived in mortal fear that the bank would eventually figure out their mistake and I would be hauled off to prison. That’s basically how I feel now. I’m waiting for my publisher and everyone else to figure out that I’m a total fraud. But I’m still trying to enjoy it. I’m proud of the book, not because I think it’s particularly good or because it got published, but because I worked hard on it and, for better or worse, it’s the best I can do. In the end that’s the only thing you can control. Doing the work. Anything that happens after that is pure luck. All you can do is hope the world makes an error in your favor.

WP: What’s next for you? What is your hope for the next stage in your career?

JG: I’m working on a novel. I’m just trying to write the best book I can and hopefully it will be done sooner rather than later. I’ve never thought of writing as a career. At some point, about six years ago, I thought I had it in me to write a couple books. I had no idea if they would be good books, or if they would get published, but I wanted to write them because no one else was going to write them. It was something I was doing for myself, as a challenge, and as a way for me to make some sense of my life. It’s something I’d be doing regardless of any kind of professional validation. I’m 36, but I still like to go down to the park and shoot baskets. It’s not doing anything for me. It’s not leading anywhere, and at this point, I’m pretty sure I’m not going to play in the NBA. I just like the sound of the ball going through the net. I look at writing the same way.

WP: Your stories take place in and around Los Angeles, and are told through the lens of “normal people.” So, what would a “Jim Gavin tour of Los Angeles” look like? Any hidden gems you’d like to share?

JG: Normal is a strong word, but I’ll take it. A nice day for me would be shoving my crappy longboard in the back of my crappy Saturn and spending a couple hours riding crappy waves down at Bolsa Chica. Followed by a monstrous burrito of some kind. In the evening, it’s nice to shoot baskets and walk up into the Baldwin Hills, where you get amazing views from downtown to Malibu. Now that McCourt is gone, I can return to the heavenly confines of Dodger Stadium. I like playing golf at Los Feliz. $7 for nine holes, and if I go with Lou Mathews, I can usually sucker him into buying lunch at the excellent café. Because of the Expo Line I’ve been going downtown a lot more, and every time I walk up the steps of the main library I feel lucky and proud to live in Los Angeles.

WP: You’ll be teaching for the Writers’ Program this fall. If you had to give a struggling writer one piece of advice, what would it be?

JG: When I was living in Boston, I was on the train and overheard a conversation between a young woman and young man, who were obviously aspiring writers. I heard the woman mention Flannery O’Connor and Jhumpa Lahiri. Then she asked the man who his favorite writers were. He gave an arrogant shrug and announced that he didn’t read much. “I don’t want to be influenced,” he said. “I just want to do my own thing.” The woman said, “But then how do you know if what you’re writing is good?” The man said, “I just know that it is.” I wanted to get up, take the young man by the collar, and scream, “You jackass! Don’t you see that your friend here, because she reads, is going to be the original one, while you will continue to write adolescent garbage the rest of your sorry life!” But we came to a stop and they got off the train, so everyone was spared this scene. So my highly unoriginal advice: read, read, read. Devour the writers you love.