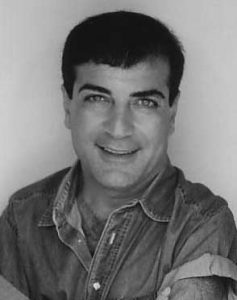 Ron Darian has a long history with the Writers’ Program as a student—most notably as the third place winner of the 21st Annual James Kirkwood Award. This fall, we proudly welcomed him to our instructor corps to teach From Fiction to Screenplay: Adapting Your Short Story/Novel for Film and TV. I sat down with Ron recently to discuss the course, his background, and his advice for writers.

Hi Ron! As one of our new instructors, tell me a little about yourself. Are you an L.A. native or transplant? (I can’t help it; I like to know everyone’s back story.)

I grew up in an idyllic little town called Syosset. Leave It to Beaver could have been filmed on my block. My life centered around three things: monsters, magic, and ham radio (and, okay, maybe another thing or two). In college I studied Political Science and Systems Engineering. Obviously I had no idea what I was doing. In my twenties I lived in New York City and worked as an actor and a stand-up. Eventually I moved out here to star in my own sitcom, which, unfortunately, required people to think as highly of me as I did.

How did you start your writing career?

Over the years, I’ve had the good fortune to have been part of several Emmy and Golden Globe Award-winning writing staffs, and to have written and re-written too many film and television scripts to count. And then I met the Writers’ Program! Now, several boatloads of classes later, I think I’m finally starting to “get it!”

You’ll be teaching a course you created called From Fiction to Screenplay: Adapting Your Short Story/Novel for Film and TV. Can you tell me more about it? I feel like it’s the perfect blend of your past experience!

I love the idea of this class: students come in with a short story or novel; they leave with a treatment for a script. This is Hollywood—why shouldn’t short fiction writers and budding novelists have a shot at the ol’ six-figure payday? I know many writers who talk about giving screenwriting a whirl, but can’t see diverting time and energy from their usual projects. Most of them have stories, published or not, that are now just languishing in a drawer (or, more likely, on hard disk.) As a prose writer and a screenwriter, I try to help authors identify the movie-worthy elements of their stories, and help them build a new entity that serves the needs of the screen.

You are a big fan of giving students positive feedback—why is that?

I wonder how many good stories have been lost to a single night of ego-pummeling. Positive feedback is critical to a writer’s growth—not to mention one’s mental health! Yet not everyone is thrilled to provide it. I think the answer lies in ego: we’re all so eager to exercise and show off our critical acumen—as indeed we should be! But too many of us stop right there. Too many of us believe our reputation will be tarnished if we pay full due to the positive aspects of a work in question. And please understand I am not advocating that students be slathered in mindless praise. Simply that critiques be specific and well-reasoned before they are voiced, and that merit be found—and trumpeted!—where it lies.

Lastly, what is the best advice you’ve received as a writer that you like to share with students?

When in doubt, go with the shorter sentence.