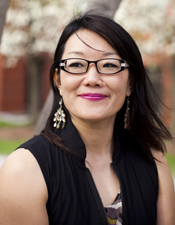 Each year several prizes are awarded for the best work published in Poetry Magazine during the previous year. This year, the honor went to Writers’ Program instructor Anna Maria Hong who was awarded the Frederick Bock Prize for two of her poems: “Pluralisms” and “A Fable”. Congratulations to Anna Maria! It’s no wonder why her class, From Art, Not Chance: A Poetry Workshop (Online) always has a long waitlist here at the Wp’. Anna Maria Hong tells us about her new project, the inspiring sound of her Champion Underwood typewriter, and how a trip to the grocery store can inform your next poem!

Writers’ Program: How does it feel to receive The Frederick Bock Prize from Poetry?! What does this mean to you as a poet?

Anna Maria Hong: Fantastic! Receiving the prize was a delightful surprise, and getting it has been a really nice boost in recognition. It’s always so nice to realize that people are reading and seriously considering your work, and I feel very honored that these poems were chosen from the many incredible poems that were published in Poetry last year.

Wp’: Tell us about your poems, “Pluralisms” and “A Fable” that Poetry Magazine selected for the Frederick Bock Prize.

AMH: Well, they are a bit challenging and not unusually odd (for my writing)! Both are sonnets of a kind, though not necessarily recognizable as such since I wrote them toward the end of my seven-year run of sonnet writing when I was actively breaking the form. Both also allude to old familiar tales, myth and fable, which is something I did a lot in the sonnet series, which culminated in my recently completed collection The Glass Age: Sonnets.

Wp’: Our students love to hear about how instructors work. What does your process look like when you sit down to write?

AMH: When I was writing The Glass Age, I would do what one can do when working in very short form, which is to complete a draft of a poem in one sitting and then go back to it over subsequent days, weeks, and months to revise it. I draft by hand on yellow legal pads using an inexpensive black rolling ball pen and then type the draft on my beloved manual typewriter, a Champion Underwood. Eventually, the draft is retyped into an electronic file, but I really like the physicality of the early process, which conditions the hand and brain to work together and which inevitably entails the sound of industry–whether one is writing well or not, the sound of the typewriter is very heartening.

Now that I’m working on a longer form project, a novel-in-verse currently titled Kingdom Animalia, my process is a bit different. I can’t finish a draft in one sitting, and since I’m at the start of the project, there’s more time spent just thinking and noodling around and feeling my way toward the new structure as I draft some small pieces and see what’s interesting.

Wp’: When one submits work for publication or to a selection committee, one must have a sense of the project being finished. We’re dying to know—how do you decide when a poem is “done”?

AMH: Yeats said something about the satisfaction of feeling something click into place, which can happen, and I think one knows when some aspect feels off or unresolved, and you have to wait for the right word or phrase or structure to present itself, which may take a very long time. But it’s also true that if you work a lot and steadily, that a poem or a larger project is done when you feel like it’s time to move on. I just read an interview in the New York Times with a friend of mine who is a wonderful painter, Amy Sillman, who said, “I never think I’m done. That’s the huge problem with an abstract painting. When are you done? You’re done when you don’t want to do it anymore.”

Wp’: What advice would you give to aspiring poets?

AMH: Don’t be afraid to pursue your curiosity. If you’re obsessed with the color ochre or Journey (the band) or Trader Joe’s or something more scientific like the life cycles of cicadas, that’s all potentially great fodder for writing that can infuse the traditional poetic subjects like time and heartbreak with fresh juice. On the other hand, you should read widely and ferociously–embrace stuff that doesn’t make sense immediately, follow the music, and take from that too. Turn off your phone. Unhook from e- anything at least one day a week to give your mind and eyes and hands the rest they need to write and think. Be patient and be generous in your interactions with other poets. Be patient and kind with yourself in your writing. Harryette Mullen calls poetry “words playing with each other.” Enjoy it as one of the best things we have.

Anna Maria Hong teaches once a year for the Writers’ Program. Her next class will likely be in spring of 2014.

Alicia Wheeler is the Program Representative for Creative Writing (Online and Events).