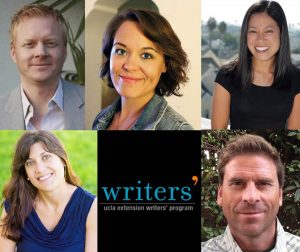 After receiving two months of 1-on-1 mentoring by an instructor, our television writing competition winners in each category (specs and pilots) have been named! The Writers’ Program officially congratulates:

In the category of TV Pilots

3rd Place: Julie Wong for Ana In Between (One-Hour Drama)

In the category of TV Specs

Last week, an ad featuring all of our competition winners appeared in the October 23rd issue of The Hollywood Reporter as part of their prize. Soon, their contact and project information will be mailed to over a thousand entertainment industry executives via newsletter. In addition, they’ll each receive a cash prize of $1000, $500, $250 (respectively). Read on to learn more about the finalists and what inspired them to write their winning scripts!

Aaron Rollins: While home visiting my family in Wisconsin, my mother twisted my arm into taking a guided tour of the neighboring Amish community. A reluctant trek into a different culture turned into an obsession for me and it all snowballed from there. You never know when and where inspiration will hit!

Grete Heinemann: My winning script is a spec episode for Sons of Anarchy. The show has so many inspiring dynamics and layers that it is really hard to point out just one specific influence. I like complexity — layers, themes, powerful dilemmas and action that is motivated by the heroes trying to protect what’s important to them: their families.

Julie Wong: I lived in Northeast L.A. for eight years and began mentoring one of the kids who lived next door. A friend suggested that I help my neighbor apply to some elite private schools for middle school, which made me give serious thought to the challenges kids in that position face. I wanted to explore the tenacity, strength, and determination of these young kids trying to forge a different path for themselves.

Gina Kelly: I wrote a spec for Showtime’s Shameless which is one of the shows on TV that really inspires me to be a better writer. So the real inspiration was the challenge of doing something on their level. I wanted to write a script that I could (hypothetically) hand to the showrunner and he or she would want to make it. That was the bar I set for myself. Also, it’s a show about a crazy family, so I’m sure some of my own family experience snuck into the script.

Rob Bowie: It may sound weird, but the inspiration for my script was Peyton Manning. To me he’s always looked like a giant little-person and I thought that would be a funny idea to play around with. Having the character Adam diagnosed with a combination of dwarfism and gigantism seemed like a no-brainer.

AR: In one word – AMAZING! My mentor was Manny Basanese. I have only great things to say about him and the rewrite experience. When I turned in the script for the competition, I felt that I had taken it as far as I could. After my first meeting with Manny, I was inspired to do a rewrite incorporating the fantastic notes that he had given me. His notes really took the script to the next level. I also have to give a shout out to Erica Byrne. I wrote the first draft in her course – Writing the 1-Hour Drama Pilot: Advanced Workshop. Without her help, I could have never flushed out my characters and story so well. I can’t thank Manny and Erica enough!

GH: With two scripts in the top three, I was lucky enough to have two mentors, Phil Kellard for my original pilot and Richard Manning for my existing one-hour drama spec. Just like every writer is different, the two mentoring styles were different and I truly feel that I got the best of both worlds. Phil’s mentoring style and notes were very story and character driven and helped me identify strengths and additional story elements that I was able to capitalize on. Richard’s mentoring style and notes really taught me how to edit my own work, how to streamline my script and how to avoid “baby writer pitfalls”. Both mentors’ insights and knowledge helped me to grow as a writer, and applying it to both my scripts left me with two polished samples.

JW: The mentoring process was hands-down the best part about placing in the competition. Richard Manning is a terrific mentor and was extremely generous with both his time and expertise. He gave me a ton of very useful advice about structure, formatting, tightening scenes and storylines, and more. I didn’t expect to learn so much from the rewriting process, but I did. And I’m very, very grateful to the UCLA Extension Writers’ Program and to my mentor for the opportunity.

GK: I worked with Phil Kellard and he was great. It felt less like mentoring and more like a real collaboration. He got where I was coming from and each of his notes elevated the story without changing my voice or making me doubt my decisions.

RB: I was paired with Manny Basanese as my mentor. Since he was the instructor for both my spec outline and spec script classes he was basically onboard from first idea to final draft. Having that familiarity made for a very easy and casual exchange of ideas. Manny was always positive and supportive in the classes as well as the rewrite stage, making the whole process a lot of fun. He was a big help in streamlining the script and gave me really funny directions for my ending.

AR: The UCLA Extension Writers’ Program is the BEST resource available for anyone who wants to become a writer in the film or television industry. The instructors are all trained professionals with solid credentials. I’ve taken a number of courses and have had really great experiences. William Hasley, Greg Elliot, Joel Thompson, Erica Byrne, Matt Witten and Phil Kellard were among the stellar instructors I’ve had. All were brilliant and really pushed me to become a better writer. The knowledge and feedback you receive, as well as the connections you make, are well worth the price you pay.

GH: I’m really grateful to have had this opportunity. Thanks so much!

JW: I want to thank the UCLA Writers’ Program instructors who have given me the opportunity to learn from them about writing for television (and that includes the two who let the aspiring TV writer crash their screenplay classes). I also can’t express how much I’ve learned from my classmates. I wrote the first draft of Ana In Between in Joel Thompson’s One-Hour Pilot class. Joel’s sage guidance and my classmates’ thoughtful feedback were invaluable components of my writing process. They’re a perfect example of the powerful combination of instructor and peer learning that happens in the UCLA Extension Writers’ Program.

GK: Sign up for the UCLA Extension Writers’ Program! It gives you the two things you really need: a deadline and feedback. And thank you to everyone in the program (teachers and classmates) who helped me get better as a writer.

RB: My experience in the Writers’ Program has been great so far. I definitely plan on taking more courses and highly recommend it to anyone looking to hone their writing skills.