Get it Written with New Instructor Craig Cox 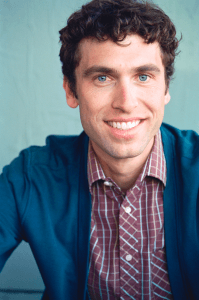 Hey, you! Yes, you, the one with that fabulous feature film idea that’s been playing over and over in your head for AGES. Sure, I know you’ve got that all-star cast picked out and a sense of the beginning, middle, and end, but here’s the thing—to be a writer, you have to write! So, if you’re ready to get your screenplay out of your head and onto the page, consider Craig Cox’s course called Writing the First Screenplay I. In case you don’t know, Craig is the writer of the hilariously entertaining movie Blades of Glory, a must-see for anyone who enjoys watching figure skating, Will Ferrell, or things that make you laugh out loud. I recently chatted with Craig about what it was like for him starting out and what advice he has for you as you begin your feature film-writing journey (that’s right, I’m talking to you)!

Writers’ Program: How did you get your start as a screenwriter?
Craig Cox: Right after college, I moved in with my brother and we started writing together just for fun. I was doing a lot of improv at the time, and he was trying to break into a career as a screenwriter. We began a few scripts that never got finished (an existential thriller, a period heist movie), basically scripts that we had no idea how to write. But once we hit on writing comedy together, that’s when things really started to click. And once we had a couple of scripts under our belt that we actually liked, we gave them to anyone who we thought could possibly pass them along to producers and agents. When you’re starting out, you have to be aggressive, and you have to be willing to ask for help.

WP: What’s the best piece of advice you received when you were starting out?
CC: Outline outline outline. Know where you’re going before you start drafting. Know your ending before you begin. It’s so important, and it’s such a time-saver. If you jump into a draft too early (which I always want to do), you’re going to run into the same problems you would’ve run into in the outline stage, but you’re going to expend a lot more time and energy getting to them. And if you’re worried that outlining will cause you to lose the creative spark of an idea, just know this. If the idea is good enough, it’ll survive the process. In fact, it’ll be a hundred times better.

WP: Where do you find inspiration when turning original ideas into scripts? What inspired Blades of Glory?
CC: I like to start with a “world” that seems ripe for comedy, and then figure out the story and characters from there. For instance, Blades of Glory came out of having a conversation while watching a figure-skating competition on TV. It’s just a funny world. I’ve been blown away by this sport since I was a kid, have always been awed by these magnificent athletes who dedicate their lives to being able to perform incredible physical feats. But at the same time, they’re performing their incredible physical feats to songs by The Art of Noise, while dressed in spangled Halloween costumes. It’s just funny.

WP: You’ll be teaching Writing the First Screenplay I this spring. What’s important for a student just starting out to know when it comes to screenwriting? It seems like an overwhelming process!

CC: It can definitely be overwhelming. Screenwriting is a rigorous, painstaking process. It involves a lot of trial and error at every stage; from the initial outline through the “final” draft. For that reason, it’s easy to find a thousand reasons to not take on the process at all. I’m a big believer in the E.L. Doctorow quote, “Writing is writing.” Writing is not thinking about writing. Writing is not waiting for inspiration to hit. Writing is getting words down on paper. You can always change the words later. First drafts never turn out exactly as you envision them. Even outlines don’t turn out the way you envision them. That’s ok. It’s often the ideas that don’t work that point you in the direction of ideas that will. So get your ideas down. Write. And then rewrite. And then rewrite some more. It’s the only way a script gets written. Writing is work. Writing is writing.