What are they doing now Past Feature Film & Television Writing Competition Winners Finalists Share Their Successes! 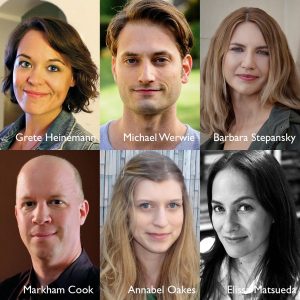 Each year, the Writers’ Program hosts a feature film and television writing competition in which 3 winners are chosen in three categories (Feature Film, Television Spec, and Television Pilot). Winners receive cash prizes and are featured in an ad in The Hollywood Reporter and in a newsletter mailed to over 1,000 entertainment executives. Recently, the Wp’ reached out to former finalists and winners and asked them, “What are you doing now?” Their answers will no doubt inspire you to polish up your screenplay in time to enter this year’s competition (the deadline is April 1!).

“I received a 2013 Nicholl Fellowship for Sugar in My Veins, and the same script also placed on the 2013 Black List. After that, I signed with ICM Partners and HertzbergMedia. I plan to direct Sugar in My Veins in the near future, and yes, I’m always working on new material!”

“After the winners were announced, several producers, managers and agents reached out with interest in my scripts and I was invited to meetings. [One] saw the potential of my script and he and I went through a set of rewrites to get my pilot ‘market-ready’. Besides the incredible exposure, an even bigger take-away from the competition was the mentoring. I learned so much from my two mentors [Richard Manning and Phil Kellard]. Their insight and guidance taught me the very important craft of rewriting and editing my own work. My writing has matured quite a bit through this experience.”

“Restoration finished in the top 30 [in the 2012] Nicholl Fellowship competition. I was contacted by several agents and managers, and ultimately signed by Original Artists. For the next several months I worked with [my agent and a director] to polish the script and get it ready to send out. I met with about twenty producers. In October, Restoration was optioned by a Los Angeles producer who is currently attaching talent to the script and securing financing. The discipline and focus on craft that I learned at UCLA Extension has been invaluable as I make the transition to full-time writing.”

“My first [produced] feature, La Vida Robot – starring George Lopez, Marisa Tomei and Jamie Lee Curtis – [was filmed] in October/November and should be released around Labor Day. I’m [currently repped by] Gersh and Circle of Confusion.”

“I’ve [placed as a top ten finalist in] the 2012 Nicholl Fellowship, made the 2012 Black List, signed with UTA and Evolution, and now have a script currently being produced by Michael Costigan. I was also named one of the Top 100 Writers on the Verge on the Tracking Board’s 2013 Young and Hungry List and I am currently adapting a New York Times best seller for Warner Bros. There are some other very cool projects and attachments in the works but I’m unfortunately unable to reveal them as of now.”

“Lovestruck eventually got on the Black List in 2009. Since then, I have acquired representation by UTA and Kaplan/Perrone Entertainment and I’ve sold two half-hour comedy TV pilots, one called Us Against the World to ABC and one called My Substitute Life to USA. I’ve also worked as a staff writer on two shows: ABC Family’s State of Georgia and MTV’s Awkward. On the feature side, I just did a rewrite on a sequel for Disney.”

The deadline to submit to this year’s competitions is APRIL 1ST! Click here for the official rules and info on how to submit!