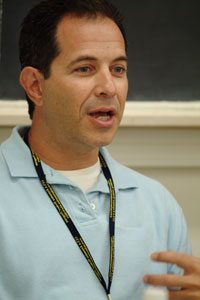 He’s a producer, development executive, chapter-author of Cut to the Chase (the Writers’ Program’s how-to guide on feature film writing), and the 2011 recipient of the UCLA Extension Outstanding Instructor of the Year Award. Laurence Rosenthal, a Writers’ Program instructor since 1997, kindly agreed to sit down with us to share some of his most valuable advice to writers, on writing.

Writers’ Program: Could you briefly tell us your history working with writers?

Laurence Rosenthal: After graduating with a BA in drama from NYU and Circle in the Square Theater School, I moved to Los Angeles to pursue an acting career. To supplement the pitiful income I earned as a day player, I got a job as a reader for United Artists. The hundreds of horrible screenplays I slogged through led me to the notion that, “hey, I could do that.” So I took a course in screenwriting and then got a job as a creative executive at a small production company. My boss was a very smart and generous man who taught me about story structure. That informed the rest of my career as a development executive, then as a writer, producer and screenwriting instructor. During my years at various production companies, I worked with dozens of A-listers as well as first-timers, plus hundreds more as an instructor at the Writers’ Program, where I took my very first screenwriting class.

Wp’: What’s the most common problem writers face and, in your opinion, what’s one of the best ways to solve it? 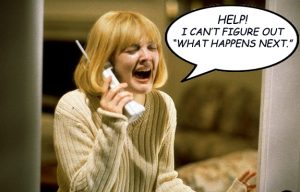 We live in an age of instant gratification and immediate information. If you have a question, you Google the answer. But there’s no drama in that. Drama exists in the state of suspension; the curiosity that leads an audience to ask “what happens next?” — and to have a stake in the answer. Yet most writers today labor under the misconception that they have to front-load their scripts with exposition and explanations, through description or dialogue. It’s a chronic mistake in what is an inherently visual medium. A screenwriter’s job is to offer the audience a window through which to witness events as they unfold in emotionally-charged environments. The operative way to do this lies in a screenwriter’s attention to behavior rather than words. Yes, writers employ words, but they do so as means of painting pictures. The way to solve screenwriting problems is to describe rather than explain; to address what the camera sees rather than what the characters go through emotionally and intellectually. The camera doesn’t see thoughts and feelings. It sees action. It sees conflict-filled events.

Wp’: Have you noticed any particular problem or setback that all writers seem to face that they may otherwise not know they all have in common?

LR: There is always frustration: the frustration of working in solitude, the frustration of wanting the quick fix, the frustration of not being understood. Add to that, the frustration of needing to pay bills and meet deadlines and what you have is a whole lot of frustration. The pressure can be paralyzing. This is sometimes referred to as writer’s block. I return again to the idea that we have a fix-it-now mentality that leads to band-aids like expositional dialogue. I have yet to meet a writer who questions their ability to write dialogue. Every writer believes that’s their strong suit, and yet it’s one of the hardest things to do well. Dialogue is not the chatter between two puppets, nor is it the way to transmit information to the audience. Dialogue must be purposeful; related in that very moment to the underlying goal of the character, whether that goal is illumination, obfuscation, or outright deceit. So the stress of getting it right is the problem, discovering ways to remain creative is the answer, whether it’s through spiritual, meditative, or physical means. It’s about making space for imagination to wander and wonder, and to trust that even going in the wrong direction will lead to new inspirations. Sometimes the alternatives are superior to the first thought.

Wp’: What’s the best thing a writer can do before entering a room to pitch?

LR: The best thing a writer can do is prepare, so that they know their story well enough to be relaxed and accept spontaneous questions that may arise, without feeling the need to answer those questions defensively. Defenses shut off communication. Curiosity keeps it open. “That’s a fascinating thought” or “I hadn’t considered that…” makes others feel like they are being heard and their opinion is respected. Then follow that with a question of your own. Engage the people you are talking to, because a pitch, like a movie, is all about the audience.

Wp’: What are some ways or habits you would suggest for writers to become more productive/prolific?

LR: Writers need to write. Bottom line. There’s “wanting to be” a writer and “being a writer” and the difference is as simple as writers write. Writing needs to be a constant in your life. You can’t diet for two hours once a week and think you’re going to lose weight. You can’t exercise once a week and expect to gain muscle tone. It has to be a regular thing. You must train your mind, your spirit and even your body in order to do it well. And I don’t mean just screenwriting. You can be writing anything, as long as you do it with intention. You should also be reading and living and exploring and researching. To my way of thinking, writing is not reducible to typing in any particular format. Writing is a thought process that takes you through challenges that are a metaphor for life’s conundrums.

Wp’: What’s the difference between a working writer and an aspiring one?

LR: Obviously, when you use the term “working writer,” it implies payment. I guess this depends on your personal value system. For me, there is a pay-off for struggling through a story and uncovering truths you didn’t see at the beginning. There is a sense of gratification at creation. Truth and understanding can be extraordinarily rewarding. That’s what working as a writer can bring. And I genuinely believe that if you write something that illuminates something about the human condition or the world we live in, it will find its audience.

Laurence will be teaching the course Writing the First Screenplay I this fall. For more info or to enroll, please click here.