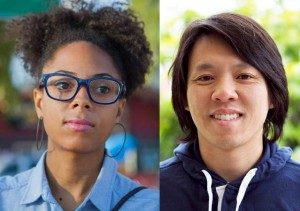 Alisha Cowan and David Ngo have both been named 2014 – 2015 NBC Writers on the Verge. The 12-week program, which focuses on “polishing writers and readying them for a staff writer position on a television series” received more than 2000 applicants, and awarded 8. We’re very excited that former Writers’ Program students snagged two of the coveted spots!

Alisha and David, who will each write a spec and an original pilot during the 12-week program, thank the Writers’ Program for their early screenwriting education. Says Alisha, “the Writers’ Program opened my eyes to the world of the writers room. I had just gotten really serious about writing and the classes honed my skills.” Of his Writers’ Program experience David says that it was his “first exposure to the ‘writer’s room’ format, which I would come to learn is a prominent part of professional screenwriting.”