Year in Review The Best of Success Stories 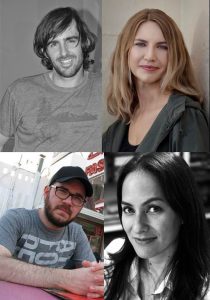 Are you a creative person who yearns to make a living doing what you love? Do you find it tough to keep your spirits up when faced with an ever more competitive publishing industry or the insular world of Hollywood? Then this article is for you. There’s nothing we love more than sharing student successes and inspiring you with the knowledge that it is possible to achieve your dreams. Below are some of our favorite (and seriously impressive) success stories from the past year; may they inspire you as much as they do us!

The Blacklist
Barbara Stepansky blew us away when, after winning 1st place in the 2013 UCLA Extension Feature Film Competition for “Sugar in My Veins,” beat out 7,200 other submissions and won a Nicholl Fellowship. Impressive, right? Barbara (and her script) then landed on the highly coveted industry Blacklist. To quote Blossom-era Joey Lawrence, “whoa!”

Spare Parts
We were pleased as punch when Elissa Matsueda, who won the 2010 UCLA Extension Screenplay Competition, let us know that her first feature was in production. Spare Parts (originally titled La Vida Robot), Elissa’s script about four undocumented Mexican-American high school students who take on the MIT team at the National Robotics Competition, stars Marisa Tomei, George Lopez, and Jamie Lee Curtis, and will be in theaters in January 2015.

CAA
Aaron Rollins won first place in the 2013 Television Writing Competition/TV Pilots category (are you sensing a theme?) for his one-hour drama Ordnung, then got signed by CAA and Echo Lake Management.

Twofer!
Leonora Epstein made us proud when she published X vs. Y: A Culture War, a Love Story (Harry N. Abrams, March 2014), which was then optioned by Warner Bros. for TV development!

Sarah Lawrence College
John Mitchell Morris, who studied novel writing with Reyna Grande and Deborah Reed, will be heading to New York this fall to begin the MFA Program in Writing at Sarah Lawrence College. A former actor and currently a civil litigator in Los Angeles, John is at work on his first novel, Flight From Mount Holyoke Avenue.

Gatsby, Interrupted
Sam Polk’s writing career exploded in a matter of months when a piece he began at the Writers’ Program was published in the Huffington Post. Then, another essay he wrote in a WP class, “For the Love of Money”, was featured on the front page of The Sunday Review section of The New York Times and quickly went viral. As a result of Sam’s huge success in the NYT, Scribner purchased his memoir, Gatsby, Interrupted, due out in fall 2015.