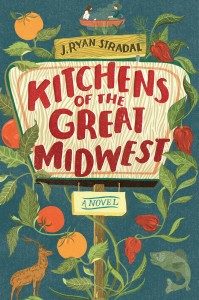 J. Ryan Stradal, who we’ve featured before here and here, has had a pretty spectacular 2014. In addition to selling his debut novel, Kitchens of the Great Midwest, to Viking (due out in July, 2015), he has won the highly competitive 2014 William Faulkner – William Wisdom Creative Writing Competition for Kitchens as well. And if that wasn’t enough to make any author’s year, he also edited the anthology California Prose Directory 2014: New Writing from the Golden State (Outpost19, October 2014), which includes stories by WP instructors Jim Gavin, Lou Mathews, and Kate Milliken.

So what does J. Ryan have to say about his recent success? “I signed up for my first Writers’ Program class back in 2004 having never taken a workshop-style prose writing class in my life. I give the instructors so much credit in helping me develop my voice, craft, and discipline; I’d been writing my entire life, but until I took a WP class, I’d never had to revise a story. Any awards I’ve been fortunate enough to win, and any skill I’ve developed as a writer and an editor, I can trace back to the lessons I learned at UCLA Extension.”