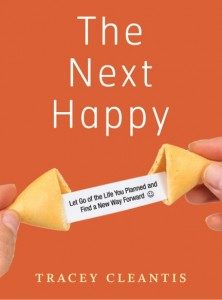 Tracey Cleantis, who has been taking Writers’ Program courses for over two decades, has published her first book, The Next Happy: Let Go of the Life You Planned and Find a New Way Forward (Hazelden, March, 2015). Publishers Weekly gave it a starred review and called it “…a must-read for anyone who’s had enough of platitudes and is ready for a self-help manual with a dose of reality.”

Originally a student of Jamie Cat Callan, Tracey went on to publish essays and short stories, and wrote as a contributor to Psychology Today and Huffington Post before returning to the WP to pursue her book. “In 2013 I began to study with Jennie Nash who is a kind of Delphic Oracle of Books and helped me figure out exactly what the book was that was inside of me. Thanks to her support, encouragement, and guidance I went on to acquire representation and sell my book.”

Click here to read an excerpt from The Next Happy.