Here’s to You, Mrs. Gebauer! How One Instructor Brought America’s Most Reclusive Author into the Writers’ Program Life and Gave Deserving Students the Gift of Learning for Generations 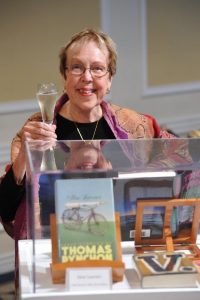 On an otherwise unremarkable spring afternoon ten years ago, I received a call from Phyllis Gebauer, a UCLA Extension Writers’ Program instructor who, for two decades, had taught novel and memoir writing.

“Linda,” she said, “I have this book collection, and I was wondering if you have any ideas about what I might do with it.”

Okay, I thought, Phyllis is a writer; she collects books. So far, nothing too unusual.

“What’s the collection?” I asked.

“A complete set of Thomas Pynchon first editions that Tom inscribed to Fred and me,” Phyllis said. “We’ve been good friends since the early 1960’s—Tom’s a great charades player.”

At that moment, my day became distinctly remarkable. It turned out that Thomas Pynchon–one of contemporary American literature’s major figures, and who, to quote my mid-1970’s Bantam paperback copy of The Crying of Lot 49, “craves and guards his privacy”–was lifelong friends with Phyllis and her late husband Fred.

“Where are the books now?” I asked.

“Oh, they’re in Trader’s Joe’s bags in my study,” Phyllis said, “but I was thinking I should do something else with them.”

“Oh my God, Phyllis! Get those books out of the paper bags!” Then I offered a calmer piece of advice: “If you haven’t done so already, you should get the collection appraised.”

Flash forward to 2009, when Phyllis shared the unexpected news that she had decided—with Thomas Pynchon’s blessing—to donate her collection to the UCLA Extension Writers’ Program. This gift came with permission to sell it, when we deemed appropriate, in order to benefit the Program. On April 11, 2011, The Thomas Pynchon Collection debuted in its first and only public display at the UCLA Faculty Center, where Phyllis was interviewed by critic David Ulin, and at which guests received a limited edition copy of Phyllis’ mini-memoir, Tom and Us. It was a jubilant evening, complete with a letter from Pynchon congratulating his friend.

Sadly, Phyllis died just weeks later, but she had one final surprise to share: a generous cash bequest, which has enabled the Writers’ Program to underwrite, in perpetuity, the Phyllis Gebauer Scholarship in Writing, previously the UCLA Extension Writers’ Program Scholarship. Through the many years I knew Phyllis, she expressed concern for students whose life circumstances made it difficult, if not impossible, to take the Program’s full-length courses. In her weekend courses, she regularly encountered students who craved the opportunity to develop their art and craft in a sustained way, but lacked the resources to do so. Now, because of Phyllis’s generosity, ten students annually are ensured the chance to realize their dreams.

And the books themselves? They remain in storage, awaiting the right time to put them on the market so that Phyllis’s goal of providing access and exposure for Writers’ Program students can be further fulfilled. In Tom and Us, Phyllis addressed the question of why she decided to donate the collection rather than sell it herself. “The answer is easy,” she wrote. “I want to give something back to the Program that has given me so much over twenty years.”

The picture which accompanies this article is of Phyllis toasting the unveiling of the Pynchon Collection. And if Phyllis was here now, I feel certain that she would be toasting the future generations of writers poised to benefit from the training her gift has ensured—and the knowledge that more good is to come.

Linda Venis is the director of the Writers’ Program and the editor of Cut to the Chase and Inside the Room.