Playwriting vs. TelevisionFilm Is There Really a Difference 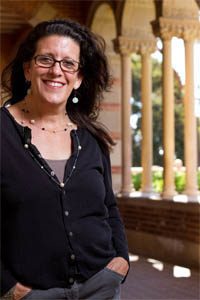 What do Beau Willimon (House of Cards), Aaron Sorkin (Steve Jobs, The Social Network), and Sheila Callaghan (Shameless) have in common? They are among countless television and film writers who got their start in the theatre and who continue to work in both mediums. While newer writers tend to dismiss playwriting as an old art form, established writers know how it built the groundwork and foundation for many great storytellers.

If you want to know how playwriting can juice up your writing or why playwrights are treated like gods, read what instructor Laurel Ollstein has to say about her new class Take the Stage: A Workshop for Film and TV Writers Looking for an Edge.

Writers’ Program: What’s the main difference between playwriting and writing for television/film?

Laurel Ollstein: I think initially when you’re first creating a play, you’re freer to find a form that fits the story you’re trying to tell, rather than with television and film, where the form is often where it starts. Also I’d say that play writing tends to focus more on language and deepening character, although this is changing. I think television, particularly, is expanding the idea of what a television series can be.

WP: Whether you’re writing for the screen or the stage, finding your voice as a writer and performer is especially important. What is one way that students can learn to identify their voice and trust that their truth will resonate with others?

LO: When I wrote my first play, it came from a tragic and unexpected loss in my life. I was in my early twenties and at the time, working as an actress and waitress. I wrote a play called Insomniac, about not sleeping, and the crazy thoughts and ghosts visiting me in my head every night to try and understand my father’s suicide. It was far from a realistic depiction of my situation. I was working at a theatre in San Francisco that had readings of new plays. My play was given a slot, a director and a cast. We had a few rehearsals and put up a staged reading. Most of the people in the audience had no idea I was writing about my life. At the discussion after the performance, the first comment was from an older British gentlemen, who I did not know. When he stood up to speak I noticed he’d been crying. He said, (imagine this is in a nice British accent), “That was the most universal play about loss I have ever seen.” Now I couldn’t have tried harder to NOT be universal. I wrote that play from my heart so specifically. And yet, this man, who could not have been more different than me, related to what I was saying so much so that he was crying. It was an epiphany. The best writing lesson I ever learned. The way to write universally is to write as specifically as possible.

WP: What words of wisdom or advice do you have for students who are still on the fence about enrolling in your class?

LO: Agents will read a play as a writing sample. It’s a good thing to have in your arsenal. It really shows your voice as a writer. To write for the theatre is the best training for any writer. You find your own voice and tell the story the way you want to tell it. And then you can see and hear it happen even by getting actors together in your living room as a simple set.

Also, I must say, the class has a great time. We do a ton of fabulously freeing writing exercises. Writing for the theatre is a joy. Sometimes, when working in TV and film, one can forget the joy part. For the final class, I bring in some wonderful actors to do readings of your work. What could be better? And, there’s food.

WP: What is a common misconception about theatre that film and TV writers need to understand?

LO: It’s not that different. A good story is a good story. It’s not pretentious. It’s whatever you want it to be.

WP: You’re also currently teaching a class “Writing Yourself onto the Stage: The One-Person Show.” How are these two classes different from other screenwriting courses and why is playwriting essential for any TV/film writer?

LO: In the theatre, the playwright is God. Yes, it’s true. No one changes your words, people want you in rehearsals, and you’re honored. Your every word means something. Theatre is a writers’ medium. It all starts with the text. In television and film it’s much more of a directors’ medium. Writers’ words can be changed by directors and actors and the story can change completely in post-production. In theatre there is no post, only present. And you might have many different productions of one play, with different casts and directors. That’s why theatre is a wonderful place to start and come back to as a writer. It all starts with the theatre.