Master Classes in Novel Writing, Feature Film Writing, and Television Writing: Is One of Them Right for You? 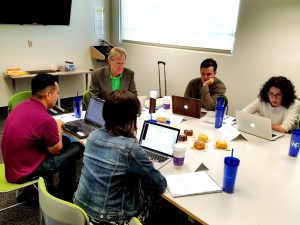 Creative writers, do you have a completed manuscript that needs revising? Screenwriters, do have at least one completed feature film script or television pilot script? Are you serious about getting published or produced?

Then you’ll want to consider one of the Writers’ Program’s three master classes this fall.

Designed for writers who are committed to getting their work published or produced, master classes are intensive 6-9 month programs that focuses on process and results by combining intensely individual instruction with supportive peer critiques.

The Writers’ Program is offering three master classes this fall:

Master classes provide an opportunity for advanced students to polish their work and get it submission-ready. In fact, a number of novels worked on in our master classes have been published, such as Golden State, written by Stephanie Kegan, and The Luminist, written by David Rocklin.

Several students who worked on scripts in our master classes have also gone on to win various prestigious competitions, including Barbara Stepansky who not only won the Writers’ Program Feature Film Writing Competition but also beat over 7,200 submissions for the coveted Nicholl Fellowship in Screenwriting. A few Master Class students have even gone on to write for shows and films, such as David Budin who landed a staff writer position on Netflix’s Grace & Frankie, and Eli Steele, who wrote and directed the film What’s Bugging Seth.

While the six-month Master Class in Television Pilot Writing is offered on the UCLA campus, the two nine-month master classes are offered online and include a four-day residency in Los Angeles. Students come from all over the world to attend the residency after having worked together online for almost six months — in fact, one Master Class in Novel Writing student flew in all the way from Hong Kong this year. The residency is a great bonding experience for all students and gives them an opportunity to deepen their craft through intensive workshopping and specially-selected guest speakers. Master Class in Novel Writing students also have the opportunity to read their work aloud at a reading at Barnes & Noble in Los Angeles.

Best of all, at the end of each course, student work is submitted to an agent or industry professional for a guaranteed read and written feedback.

Details about the 2016-2017 master classes are online now. Submissions are due in August.

Nutschell Windsor is the Program Representative for Creative Writing (online) and Events. Contact her at (310) 794-1846 or nwindsor@uclaextension.edu.