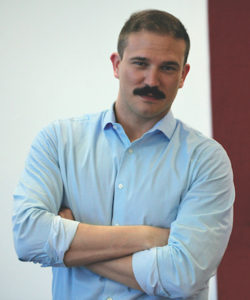 We are excited to announce that on Wednesday, October 19, Charles Jensen will officially take over as the program director of the UCLA Extension Writers’ Program. As program director, Charles will have administrative and operational oversight of the largest self-supporting continuing education creative writing and screenwriting program in the world. The Writers’ Program currently offers upwards of 400 courses annually in fiction, creative nonfiction, poetry, writing for the youth market, publishing, feature film writing, and television writing.

Charles comes to the Writers’ Program from the Colburn School in LA where he worked as Managing Editor. Previously, he served as Director of the Writer’s Center in Bethesda, Maryland; was the assistant director at the Virginia G. Piper Center for Creative Writing at Arizona State University; and was Communications and Events Manager at Arts for LA. He also has several years of experience teaching writing and cinema, both onsite and online, at several schools including the University of Denver.

Charles has an MFA in Creative Writing-Poetry from ASU as well as a BA in Cultural Studies & Comparative Literature/Film Studies from the University of Minnesota. He’s the author of five chapbooks of poems including The Nanopedia Quick-Reference Pocket Lexicon of Contemporary American Culture and the forthcoming Breakup/Breakdown. His book, The First Risk, was a finalist for a 2010 Lambda Literary Award and his prize-winning poetry has been published extensively in literary magazines, anthologies, and textbooks.

His predecessor, Linda Venis, retired from the Writers’ Program after 30 years of dedicated service to UCLA Extension.