UCLA Extension instructor Lou Mathews and Writers’ Program Alumni Jim Gavin sat down with Aug Stone on the Etcetera podcast to share a few gems about writing – and how they became acquainted.

How did you two meet?

Jim: I think it was September or October of 2005. At the time I was working in plumbing sales and lived in Long Beach. I hadn’t written anything in a long time, and during that period, I had an old friend – she was taking a class at UCLA Extension and some of her classmates were there, and I was like ‘oh that kind of seems fun.” At that point, it had less to do with writing and more just – I just wanted to go somewhere where [I] could talk about books, and maybe write. Eventually I did sign up for a class and I looked up Lou and I looked up his book. I didn’t know who Lou [or anyone] was but I ordered his book and ended up loving it. I took another class with Lou during the spring and [eventually] we got to be pals. 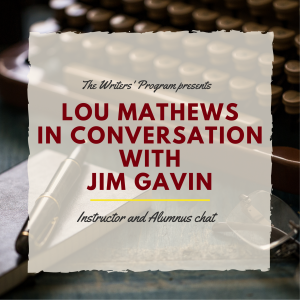 Lou: Jim showed up in class in 2005, and this is back when I was asking people what they were reading. Jim started talking about Evan Connell. I looked at him and said how do you even know who Evan Connell is? This was a brilliant San Francisco writer best known for Son of the Morning Star. The fact that Jim even knew who this guy was kind of startled me, and then he started going through some of the other things he was reading, and I thought, ‘Oh, this is somebody who is serious.’ Of course, once I started reading his writing, there was sort of an instantaneous bond – in a lot of ways we write about the same people.

Tell us about when you fell in love with literature and writing.

Lou: I was raised in libraries. My mom was a catholic schoolteacher with five boys to support, so we spent all of our off time in libraries. From the time I was probably about four or five years old, I was bringing home four or five books a week. I started with ancient history, then discovered science fiction when I was eight or nine. The first book that hooked me was Robert E. Howard’s Conan the Barbarian. I actually still have a library copy of that book, because he wrote with such conviction. If I get somebody who’s spending too much time in their head, I force them to read Robert E. Howard.

Jim: I remember on the last day of my junior there was a final being proctored by the AP English teacher for the next year. After the test she was walking out the door – and I just got this weird feeling that I’ve only ever had once or twice in my life – that my future was walking out the door. So, I chased her down the hallway and asked if there was any chance I could still apply to get into AP English. She said, “I’ll tell you what, read these two books over the summer. I’ll give you a test on them the first day of school. If you do well, I’ll let you in.” The two books were Crime and Punishment and East of Eden. I read those books with such intensity and lived them so intensely. I showed up the first day of senior year ready to take this test and she goes, “Oh you don’t have to take the test, you’re in.” She kind of tricked me into becoming a reader!

What is it that made you decide writing was something you wanted to do with your life? 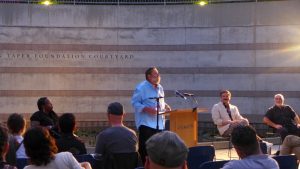 Jim: For me, it was less something I was running towards and more something I was being chased by. From basically 25 to 30 I didn’t write anything, but I read a lot. I think at some point in that period I had to grow up a bit more – you have some losses in life, etc. – but at some point, I felt like I wanted to try It again. I didn’t do it with any sense of there being a career and I still don’t. There’s been no “plan.” There’s been a dedication to trying to get something right. You read the good stuff and you want to make the good stuff. I get it – some think it’s foolish to expect a career out of writing – but once you kind of realize you’re going to do it anyway, that’s the beginning of a real writing life, I suppose.

Lou: In high school I worked for the Glendale Public Library System and there were two librarians, Marie Weiss and Eva Thompson. Marie in particular figured out I was going to be a writer before I did. She would always say, ‘You have to read this’ and the first book she gave me was Up the Junction by Nell Dunn, an English writer. It’s 139 pages, and it’s the first book I ever read cover to cover and then opened up again to page one. I was like 16 or 17 at the time, and I was just knocked out. It’s the most compressed writing I’ve ever come across. I actually read her before I read Hemingway. Once I read Hemingway I figured out just how much she’d gotten from Hemingway – except she took him to the next level. She gives the reader just enough to keep it moving.

What’s the next endeavor for each of you?

Jim: I would like to keep publishing one of two types of things: great literary fiction like Lou Mathews’ Shaky Town and also really strange niche stuff. Maybe some of it inspired by the television program Lodge 49, but we’ll see. I think this has been a learning process, but it’s been great.

Thanks again to Lou and Jim for allowing us to use this interview for our website! It’s always special when a student and an instructor form a lifelong friendship, because of a shared passion for writing.