The Young and The Reckless: Writing for Teens Speaker Interview with Abdi Nazemian 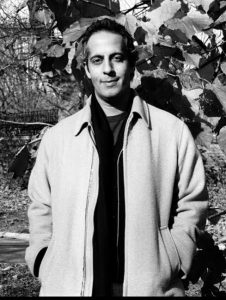 ABDI NAZEMIAN spent his childhood in a series of exciting locations (Tehran, Paris, Toronto, New York), but could usually be found in his bedroom watching old movies and reading.

Abdi has written six produced films, including THE ARTIST’S WIFE, MENENDEZ: BLOOD BROTHERS, and THE QUIET. He wrote, directed and produced the short film REVOLUTION (2012). He has also written for the television series ORDINARY JOE, THE VILLAGE and ALMOST FAMILY. He is proud to say that his words have been spoken by Carmela Soprano, The Nanny, The Girl With The Most Cake, and a Rockford Peach.

Abdi’s first novel, THE WALK-IN CLOSET, was awarded Best Debut at the Lambda Literary Awards. He has written three young adult novels, all published by Balzer + Bray / HarperCollins: THE AUTHENTICS (2017), LIKE A LOVE STORY (2019, a Stonewall Honor book and one of Time Magazine’s Best YA Books Of All Time) and THE CHANDLER LEGACIES (2022).

Abdi has been an executive producer or associate producer on numerous films, including CALL ME BY YOUR NAME, IT HAPPENED IN L.A., THE PRICE, THE HOUSE OF TOMORROW, and LITTLE WOODS.

Abdi is the Keynote Speaker for our YA Symposium, The Young and the Reckless: Writing for Teens.

Q1: How has your experience growing up in many different places shaped the way you see your fictional or nonfictional worlds?

The biggest way it shaped my fictional worlds is that it inspired me to write about my cultural heritage and my experience as a queer immigrant. Also, because I moved so much, I was often isolated. During those periods of isolation, I was saved and shaped by stories, so I truly believe in the power of storytelling. The arts were my escape and my salvation. In my opinion, stories are how we make sense of the world. They don’t just describe our lives, they save them. They don’t just give us facts about other humans, they teach us to empathize with them. I think the reason I’ve devoted my life to so many different forms of storytelling is that I know firsthand how stories can give us the tools we need to build our identity and find our voice in an often unforgiving world. And I think one of the reasons I’ve been so committed to young adult literature is that every young person is in a constant state of identity exploration and development. It’s so exciting to write stories that hopefully allow them to understand some part of themselves.

Q2: You write novels, and you also write screenplays. Are there similarities between these two genres? In your experience, what is the biggest difference between the two?

The biggest difference is that writing a book is a deeply solitary experience. For the bulk of the novel-writing process, I’m literally and emotionally alone. I love it, because it’s a healthy way to excavate what needs to be excavated, and it’s such a pure form of self-expression. Film, and especially television, are incredibly collaborative. There’s very little time spent alone. I’ve been lucky to work with so many incredible artists in film and television, and those collaborations are opportunities to learn from others, and laugh with others. I genuinely love both jobs equally. Usually, after writing a book, I crave the social aspect of film and television. And after wrapping up work on a TV show, I’m usually ready to hole myself up and write a novel.

Q3: What aspects of your creative process do you enjoy most? Which are most challenging?

My favorite part of television writing is the collaboration with people I love. My favorite part of writing books is the opportunity to go deep inside myself and write about the things that feel unfinished inside me. I love being able to do both because they feed different parts of me. In terms of what challenges me most, it would definitely be rewriting. The deeper I get into rewriting, the less I enjoy it. I love a first draft because it’s full of discovery, magic and surprise. I don’t plot out my novels, so the first draft often feels like it’s flowing through me and I love that feeling. It’s true freedom. Rewriting is a job, though a very important one.

Q4: What’s the one piece of advice you’d give to the writers attending the symposium?

I hate limiting myself to just one piece of advice, but if I have to, I suppose it’s never to self-edit when writing a first draft. I learned this lesson in college when a professor asked us to write a story using spontaneous prose, without ever stopping, not even to fix typos or errors. I’ve never written the same way since. If you do feel the need to edit, or have any doubts about what you’re writing, vent about it in a journal and then go back to your writing. The first draft should be all about freedom and discovery. There’s plenty of time to edit later. 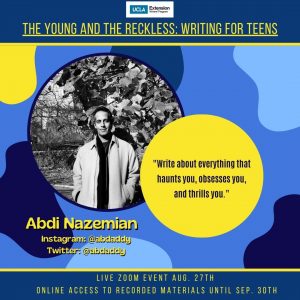 Abdi’s Keynote for the symposium is titled:

Conflicting Identities: Writing Yourself Out of Invisibility