We’re thrilled to close out 2022’s success stories with one of our own: Jeff Bonnett wrote Falling for Christmas, a holiday movie featuring Lindsay Lohan now streaming on Netflix. The script was started in a Writers’ Program course, and helped along in early drafts with notes from fellow staff and instructors. 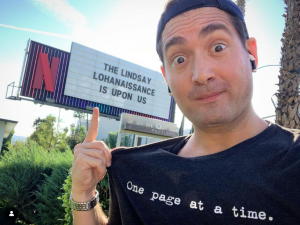 Jeff says of the experience, “I can definitely attribute a huge amount of my success thus far to the Writers’ Program. That is not a shameless plug. Before I began working here, I was writing in circles, and getting nowhere. My first class with Corey Mandell literally rewired my brain in ten weeks and I was never the same after that. That was the starting point. That and a few other courses prepared me enough to tackle the first script opportunity I got, which was writing a draft for my concept for the Hallmark Channel (in four weeks under a deadline – my first feature). That was my Writers’ Program: Year One. And since then, I’ve had dozens of courses with influential instructors; too many to name here.” 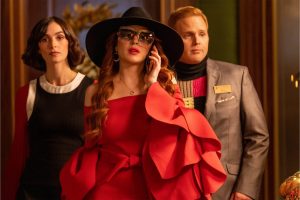 He continues, “All of which prepared me for my second feature, which was conceived in Kate Marciniak’s online course, Writing Your Feature Film from the Story Analyst’s POV back in Winter 2016. I didn’t return to the project until Winter 2018, but it was in that course’s first week when I realized the concept I was pitching was way too complex for a Hallmark-ian Christmas movie, and I immediately pivoted in 30 minutes and pitched the concept that later became Falling for Christmas on Netflix. Cut to: today, that movie debuted at #1, was in the Netflix top ten in 92 countries, and was the top U.S. streaming movie across all platforms as of November 20th. It’s been a wild journey and I’m hoping to book some podcasts and other press to explain more of it. The first one I have coming is the podcast On the Page with Pilar Alessandra, so stay tuned for that. For now, thanks for reading, thanks for watching, enjoy the show everyone and Merry Christmas!”

HUGE congratulations to Jeff — the staff is so proud of him and his success! If you have a success story, we want to hear about it! Click here.