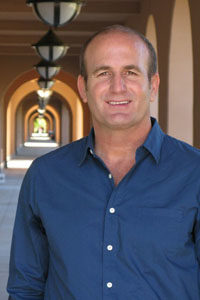 Writer/producer and WGA member whose writing credits include sitcom, animation, and sketch comedy programs. He has performed with various improv groups in Los Angeles, including The Groundlings, Funny You Should Ask, and The Company of Angels.

I don’t think it’s a coincidence that many comedy television writers and screenwriters come from a strong improvisational background. We teach the “tools” of improvisation to give writers that edge in their writing, development, and pitching of their ideas. Much of comedy writing can be a collaborative effort and improvisational skills help writers work with other people’s ideas (rather than just their own). Although our course is not geared towards performance, the process of getting on your feet and doing improv allows a writer a chance to get up in a safe environment and practice what might make a scene or idea funny in a script.

“Mark was very structured and knew exactly when to guide us when it seemed like we were struggling. He was very organized and led us through improv well.” – Writers’ Program Student