Books by the Writers’ Program

Now Available Wherever Books are Sold!

Generations of aspiring screenwriters have benefitted from UCLA Extension Writers’ Program’s training, and now, for the first time, this training is available outside the classroom. 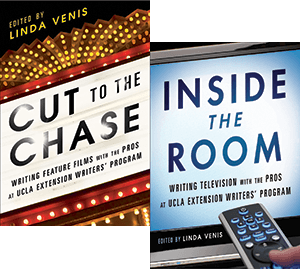 The authors are all Writers’ Program instructors and have had, collectively, 100’s of produced movies, television series, and pilots, including Liar Liar; Heartbreakers; Journey to the Center of the Earth; Meet the Robinsons; Spirited Away; The Simpsons; House, M.D.; Battlestar Galactica; Pretty Little Liars; Homicide: Life on the Street; and Frasier. They are also producers and executives (Scream, Beautiful Girls, Medium, Mad Men, The Glades) and authors of popular screenwriting books (The 101 Habits of Highly Successful Screenwriters, Writing for Emotional Impact, and Writing the Romantic Comedy.)

Edited by Linda Venis, Former Director of the UCLA Extension Writers’ Program, Cut to the Chase and Inside the Room are must-haves for any screenwriter who is serious about making it in Hollywood.

Praise for Cut to the Chase and Inside the Room

“Cut to the Chase is a great value for aspiring screenwriters, leveraging the knowledge of many Extension instructors with the collective experience of 20 produced feature films in one volume. From the inception of the idea to the post business of taking meetings and pitching, this book has it all.”

“Cut to the Chase cuts the fat out of the screenwriting process. It’s lean and mean without being intimidating. I think it’s incredibly smart and cuts close to the bone of what really makes a great movie; less is really more with these wise guides taking the grizzle out of process!”

Karen Leigh Hopkins, Writer-Director (Because I Said So, Stepmom)

“Inside the Room should be required reading for anyone embarking on or dreaming of a career in television. Like the classes I took at UCLA Extension when I was starting out, it demystifies the process of becoming a working television writer and tells you how to go about it. Most of all, it lets you know it’s possible.”

“Aspiring television writers have found their bible in Inside the Room. It is an honest, insightful and incredibly accurate depiction of how the modern television system works. No book can guarantee success, but this one will get you as close as any can!”